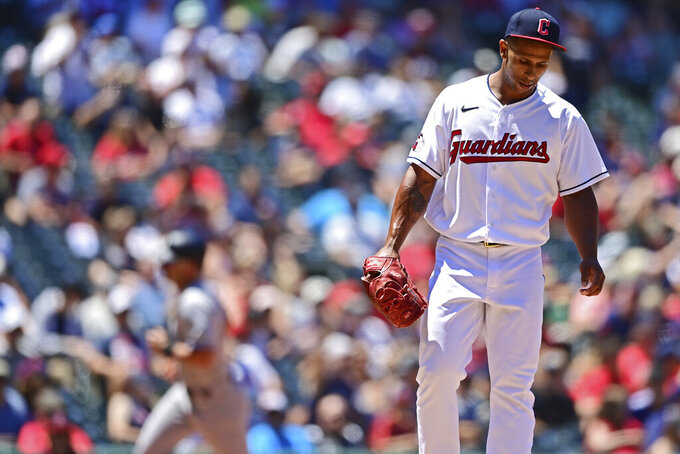 CLEVELAND (AP) — Guardians reliever James Karinchak is back with Cleveland after being sidelined all season with a shoulder strain suffered during spring training.

Karinchak was recalled from Triple-A Columbus on Sunday when the Guardians placed left-hander Anthony Gose on the 15-day injured list with a triceps strain he apparently sustained a day earlier.

The hard-throwing Gose gave up four runs and two hits in Cleveland's 13-4 loss in the first game of a doubleheader Saturday against the New York Yankees.

“It’s not serious,” pitching coach Carl Willis said before the Guardians tried to avoid being swept. “Now these are things that sometimes take a few days to really show what they really are. The hope is it’s two to three days and he’ll be feeling better, we can start a program for him to get him back soon.”

The Guardians will play their third doubleheader in six days on Monday in Detroit and could be short in the bullpen, so they brought up Karinchak, who was activated from the 60-day IL and optioned to Columbus on Friday.

The 26-year-old Karinchak, who has been used to setup and close, never expected his injury to turn into something long term.

“We had a couple of unfortunate things, but I’m healthy now and that’s a blessing and all the trainers and everybody that got me here,” he said. "I’m very thankful.”

The Guardians have been encouraged by recent performances by Karinchak, who went 7-4 with a 4.07 ERA and 11 saves last season.

“His last three outings have been really, really good,” Willis said. "He has continued to improve and kind of started to show signs of being his old self. I don’t know that he would have necessarily been recalled today if not for the schedule situation and the Gose situation.

“He was getting extremely close. But we just wanted to see him maybe get a little more consistent. But he’s certainly trending in a very positive direction.”