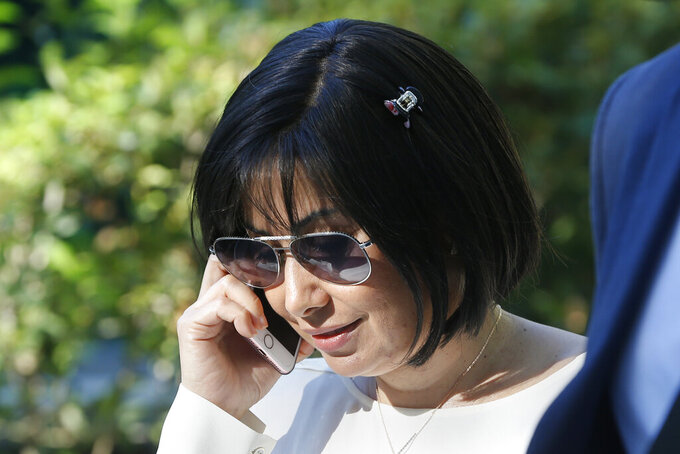 Paul White, ASSOCIATED PRESS
FILE - In this Sept. 24, 2018 file photo, Claudia Patricia Diaz Guillen, the nurse of former Venezuelan President Hugo Chavez, leaves the national court in Madrid, Spain. Spain's National Court has consented to the extradition to the United States of ex-Venezuelan leader Hugo Chávez's former nurse, who is charged in Miami with money laundering. The court said in a statement that its magistrates consider that all requirements are met for the extradition of Claudia Díaz to proceed. (AP Photo/Paul White, File)

MADRID (AP) — Spain’s National Court consented Friday to the extradition to the United States of ex-Venezuelan leader Hugo Chávez’s former nurse, who is charged in Miami with money laundering.

The court’s magistrates “consider that all requirements are met” for the extradition of Claudia Díaz to proceed, the court said in a statement.

The court rejected Díaz’s arguments against extradition that she is being investigated in Spain on the same charges and that she obtained Spanish nationality last April.

The magistrates ruled that the Spanish investigation does not cover the same allegations, saying the U.S. investigation is much broader, and that factors that might prevent extradition of a Spaniard are not in question.

Díaz and her husband Adrían Velasquez, a former security adviser to Chávez, have been living in Madrid, where they were briefly arrested in 2018 on a Venezuelan warrant. But Spain’s supreme court rejected Venezuela’s extradition request, finding the couple could be tortured if they returned home.

A Miami federal court has accused Díaz of taking bribes from a billionaire media mogul to green light lucrative currency transactions when she served as Venezuela’s national treasurer.

She and her husband are accused of taking at least $4.2 million in furtherance of the bribery scheme, according to the charges presented last October. The payments came from companies and bank accounts located in Switzerland to the couple’s accounts in Miami.

Behind the payments, according to prosecutors, was businessman Raúl Gorrín, owner of the country’s last major private TV network, Globovisión.

Gorrin was placed on the U.S. Immigration and Customs Enforcement’s most-wanted list after being charged for his alleged role in a $2.4 billion money laundering conspiracy in 2017.

U.S. prosecutors have charged dozens of Maduro-connected officials and businessmen as part of a campaign to root out corruption plaguing the oil-rich South American nation.

As much as $300 billion is estimated to have been raided from Venezuela’s state coffers in two decades of socialist rule.