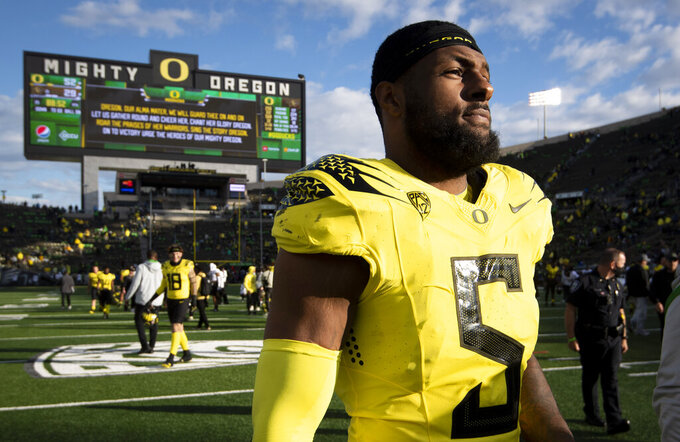 Andy Nelson, ASSOCIATED PRESS
FILE - Oregon defensive end Kayvon Thibodeaux (5) leaves the filed after an NCAA college football game Saturday, Oct. 30, 2021, in Eugene, Ore. Opponents of the Oregon Ducks are keying in on defensive end Kayvon Thibodeaux, including Washington coach Jimmy Lake, who called Thibodeaux a “game-wrecker.” Seventh-ranked Oregon visits the Huskies Saturday, Nov. 6, after earning the No. 4 spot in the initial College Football Playoff rankings of the season. But it's not just opponents paying attention: Thibodeaux is getting attention from the NFL, too. (AP Photo/Andy Nelson, File)

Although an injury earlier this season hurt Oregon defensive end Kayvon Thibodeaux's hopes for a Heisman, it did nothing to diminish his stature among the Ducks' opponents.

Seventh-ranked Oregon visits the Huskies on Saturday, the Ducks' first game since earning the No. 4 spot in the initial College Football Playoff rankings of the season.

Lake, and his fellow Pac-12 coaches who are tasked with facing Oregon, are keying in on Thibodeaux — for good reason.

Just ask UCLA. Thibodeaux had a career-high nine tackles, including 4.5 tackles for loss, two sacks and a forced fumble in a 34-31 victory over the Bruins two weeks ago.

“We did a lot of things. We slid the protection to him. We kept maxing protection, put the tight end on them, and we tried to give him as many different looks as possible,” Bruins coach Chip Kelly said. "And he’s a really talented player and you do have to give him credit. I think he’s what everybody thinks he is — a heck of a football player. But we gave him every different look that you could possibly give him, so credit to him.”

When Colorado coach Karl Dorrell was asked what “jumps off the tape” when watching film of Thibodeaux, Dorrell quipped: "Him jumping off the tape.” Oregon (7-1, 4-1 Pac-12) beat the Buffaloes 52-29 last weekend.

A 6-foot-5, 258-pound second-year sophomore out of California, Thibodeaux proclaimed at the start of the season that his goal was to win the Heisman, a tall order for a defense player.

But he sprained his ankle in Oregon's opener and had to miss the next two games. He also was ejected from the Ducks' overtime loss at Stanford, the team's lone loss this season, and he had to miss the first half of the next game against Cal.

Nonetheless, he has 26 tackles this season, leading the team with 7.5 tackles for loss. He also leads the Ducks with four sacks. For his career in Eugene, Thibodeaux has 16 sacks and 31 TFLs.

He's increasingly facing double teams and other efforts to minimize his potential damage.

“It does take kind of the fun away from the game because it’s hard to really get going, but just being able to know that my teammates can make up for it and will come out and make the play,” Thibodeaux said. “It’s fine. It is what it is.”

He's also facing more scrutiny from NFL scouts who are showing up at Oregon's games. Thibodeaux is widely considered one of the top picks in next year's NFL draft if he chooses to leave the Ducks with eligibility remaining.

The general managers from the Detroit Lions and the Houston Texans were on hand at the Rose Bowl to scout Thibodeaux against UCLA.

“I kind of like to reflect on how I carry myself, and what ways can I improve on the man I’m being, or the man I’m perceived to be. So it’s pretty good,” he said of the attention. “I’m happy that I was able to make some plays and do certain things in that game."