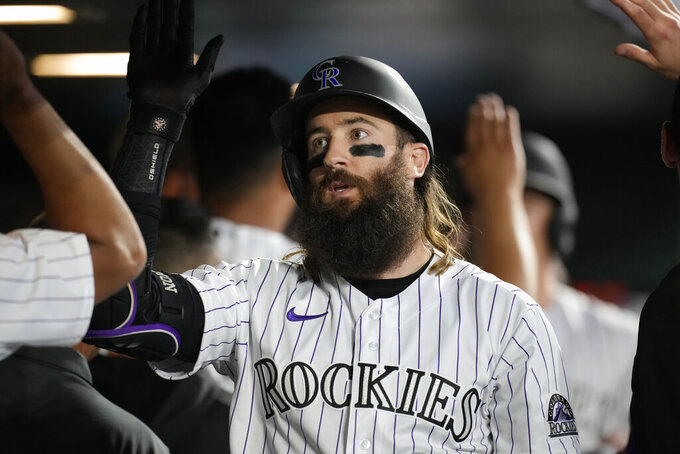 DENVER (AP) — José Ramírez doubled home the go-ahead run in the 10th inning, lifting the Cleveland Guardians to a 4-3 win over the Colorado Rockies on Tuesday night.

Ramírez also had a two-run single and Josh Naylor doubled twice and had an RBI hit for Cleveland. Charlie Blackmon hit his 10th home run of the season, a tying two-run drive in the bottom of the seventh inning, and C.J. Cron had a run-scoring triple for the Rockies.

Ramírez ground sharply into right field off the first pitch he saw from Robert Stephenson (0-1), scoring designated runner Amed Rosario from second base.

Bryan Shaw (2-0) pitched a scoreless ninth for the victory and Emmanuel Clase got three outs for his 12th save as the Guardians tagged out designated runner Blackmon in a rundown between home and third for the first out in the 10th before Cron ground into a game-ending double play.

Blackmon advanced to third when Yonathan Daza reached on second baseman Andrés Giménez’s fielding error. Brendan Rodgers then hit a slow dribbler back towards the mound that Clase fielded and flipped to catcher Austin Hedges as Blackmon broke for the plate.

Blackmon headed back to third, chased by Hedges but reversed course and again charged for home when the ball fell from Hedges’ glove. But the Cleveland catcher quickly retrieved it and threw to Clase, covering home. Blackmon again ran back for third and Clase was right behind him, ultimately getting the ball to third baseman Ramirez who tagged out Blackmon.

“Clase has done a lot of work at fielding his position and in that situation, we needed to come home,” Hedges said. “I was yelling for it and Clase made a nice athletic play. I made an extremely unathletic play, but we ended up getting the out and then Clase finished the job.”

Said Rockies manager Bud Black: “I think if Charlie would have had it to do over again, he probably would have held his ground.”

Cleveland starter Shane Bieber, in his first appearance at Coors Field, took a 3-1 lead into the seventh inning but could not hold it. Brian Serven hit a one-out single and Sam Hilliard struck out before Blackmon connected on a 1-1 offering from Bieber, pulling the Rockies into a 3-3 tie. It was the Blackmon’s 201st career homer, tying him with Dante Bichette for the sixth-most in franchise history.

“It’s a frustrating game at times and one pitch can change the whole story line every outing,” Bieber said. “It is what it is. I thought there was a lot of good. Just got to take it and run with it and move forward. Ultimately, it would have hurt a lot more if we came out of it with an `L,' but we didn’t. So it was great."

The Guardians opened the scoring in the third on Ramírez’s two-run single off Antonio Senzatela. Cleveland made it 3-1 on Naylor’s run-scoring single in the sixth.

Senzatela went six innings and allowed eight hits and three runs, two earned. He struck out four and walked one.

Guardians: RHP Aaron Civale is slated to make another rehab start Wednesday for Triple-A Columbus as he works to return from left glute soreness. Placed on the 15-day injured list May 22, Civale could rejoin the Guardians next week during their series at Minnesota, manager Terry Francona said.

Rockies: OF Kris Bryant was on the field prior to the game, taking batting practice. He continues to work toward returning from a lower back strain that has caused him to miss 19 games over separate stints on the injured list.