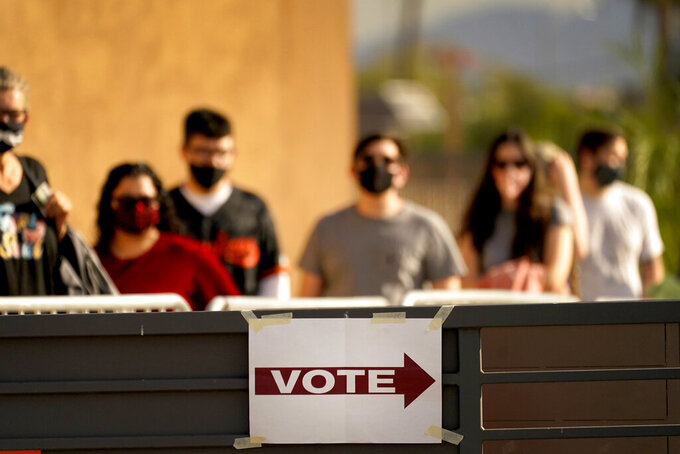 Matt York, ASSOCIATED PRESS
FILE - In this Tuesday, Nov. 3, 2020, file photo, voters stand in line outside a polling station, on Election Day in Mesa, Ariz. Ron Watkins, a prolific promoter of false conspiracies about the 2020 election who is closely tied to the QAnon movement, says he's running for Congress as a Republican in Arizona. (AP Photo/Matt York, File)

PHOENIX (AP) — Ron Watkins, a prolific promoter of false conspiracies about the 2020 election who is closely tied to the QAnon movement, says he is running for Congress as a Republican in Arizona.

Watkins has a large and fervent following among Donald Trump supporters who believe the former president's false claims that he lost the election because of fraud. His candidacy could shake up the race in one of the GOP's top congressional pickup targets.

Watkins filed papers with the Arizona secretary of state this week and later posted a video on Telegram repeating his claim that the election was stolen from Trump.

“We must now take this fight to Washington, D.C., and vote out all the dirty Democrats who have stolen our republic,” Watkins says in the video, taped outside the offices of Arizona Attorney General Mark Brnovich, whom Watkins is pressuring to indict people over the 2020 election. “We must fix our elections from inside the machine.”

It's not clear whether Watkins currently lives in Arizona or its 1st Congressional District. In the days before his announcement, he posted photos of himself with Republicans Kari Lake, a former television anchor running for governor with Trump's endorsement, and Tom Horne, a former attorney general and state schools superintendent running again to lead the Education Department. He endorsed both candidates.

Watkins did not answer the phone and did not respond to text messages and emails sent to the contact information on the statement of interest he filed with Arizona election officials.

Watkins was the longtime administrator of 8kun and its predecessor, 8chan, online message boards that were known for misinformation and hate speech, and which played a crucial role in seeding the QAnon conspiracy movement. He has said he gave up the role last year.

A core belief for QAnon followers is that Trump was secretly fighting a Satan-worshipping, child sex-trafficking cabal of prominent Democrats, Hollywood elites and “deep state” enemies. An internet poster calling himself Q fueled the movement by allegedly posting clues about Trump's effort, many on the 8kun message board.

Many believe Watkins himself is responsible for the messages purportedly posted by Q. He denies it.

Arizona's 1st District, one spanning vast swaths of rural northern and eastern portions of the state, is a top pickup target for Republicans. The boundaries are still being drawn by the state's independent redistricting commission, but it's widely believed the district will be one of the state's most competitive.