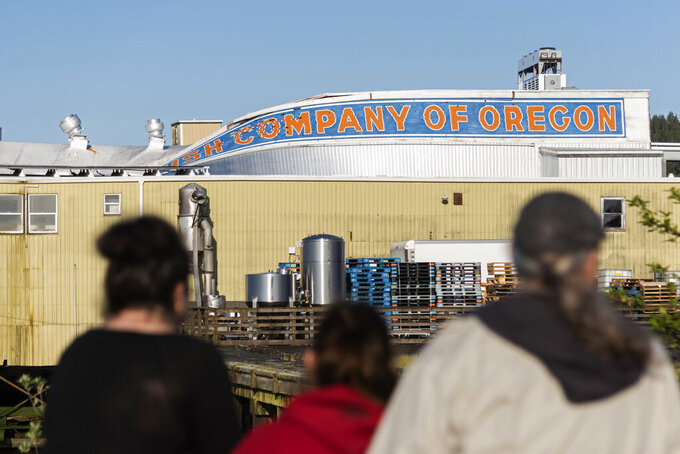 Lydia Ely, ASSOCIATED PRESS
People gather on the 6th Street pier to see the aftermath of a partial collapse at Buoy Beer Company, Tuesday, June 14, 2022, in Astoria, Ore. The roof of Buoy Beer caved in and parts of it are dangling into the Columbia River. The popular warehouse-style brewery was closed at the time and no one was killed or injured. (Lydia Ely/The Astorian via AP)

ASTORIA, Ore. (AP) — A brewery in Astoria in northwestern Oregon partially has collapsed, with much of its roof caved in and parts of the building dangling into the Columbia River.

No one was killed or injured in the Tuesday incident and the restaurant was closed at the time, The Astorian reported. A natural gas leak was reported and utilities have since been turned off. The U.S. Coast Guard and emergency responders deployed to the scene.

In a tweet, Buoy Beer said “everyone is safe.”

Authorities don't yet know what caused the warehouse-style Buoy Beer building to crumble.

Jessyka Dart-McLean, Buoy Beer’s marketing manager, said the part of the building that caved in had already been closed off to employees and the public. The popular brewery, located on a pier, closed its kitchen in September after discovering issues with the dock and pilings underneath.

“The Columbia River waters shift, and that’s what we were battling against in that area,” she said.

The company, one of the North Coast’s largest breweries, has been expanding the waterfront campus into neighboring buildings over the past few years.

The restaurant will be shuttered indefinitely.

This story has been updated to remove incorrect reference to brewery being closed.