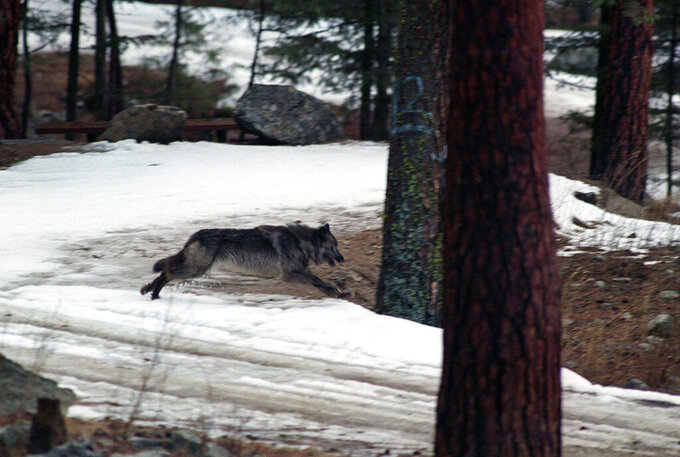 Doug Pizac, ASSOCIATED PRESS
FILE - In this Jan. 14, 1995, file photo, a wolf leaps across a road into the wilds of central Idaho north of Salom. Environmental groups have notified Idaho Gov. Brad Little and other state officials on Monday, July 19, 2021, of their intent to file a lawsuit over an expanded wolf-killing law the groups say will result in the illegal killing of federally protected grizzly bear and lynx. (AP Photo/Douglas Pizac, File)

BOISE, Idaho (AP) — Environmental groups have notified Idaho Gov. Brad Little and other state officials of their intent to file a lawsuit over an expanded wolf-killing law they believe will result in the illegal killing of federally protected grizzly bear and lynx.

The Center for Biological Diversity, Western Watersheds Project and others on Monday gave a required 60-day notice of their intent to sue if Idaho officials don’t prohibit all hunting, trapping and snaring in grizzly bear and lynx habitat.

For lynx, the conditions could cover most of Idaho except for the southwestern portion of the state. For grizzly bears, the areas would include portions of northern, central and eastern Idaho. Wolves are found in roughly the northern two-thirds of the state.

In May, the Republican governor signed into law a measure lawmakers said could lead to killing 90% of the state’s 1,500 wolves through expanded trapping and hunting. It took effect July 1.

Lawmakers who sponsored the measure, backed by hunters and the state’s powerful ranching sector but heavily criticized by environmental advocates, said numerous times that the state is allowed to cut the number of wolves down to 150 before federal authorities would take over management of the species. They said reducing the wolf population would reduce attacks on livestock and boost deer and elk herds.

“Lynx, grizzly bears, and gray wolves all inhabit similar habitat types and geographic ranges in Idaho, and wolf hunting and trapping therefore frequently occur in areas in which lynx and grizzlies are also present,” the groups said in their letter. “Moreover, because snare and other authorized means of hunting and trapping are imprecise tools, they pose a substantial risk to non-target species, including lynx and grizzly bears.”

Roger Phillips, spokesman for the state Department of Fish and Game, said the agency doesn't comment on pending litigation.

Little's office didn't immediately respond to a request for comment from The Associated Press.

Environmental groups filed a similar notice of intent to sue in Montana last month that also involves the potential killing of grizzly bears and lynx by wolf hunters and trappers.

A primary change in the new law allows the state to hire private contractors to kill wolves and provides more money for state officials to hire the contractors.

The law also expands the way wolves can be hunted and killed. Those methods include trapping and snaring an unlimited number of wolves on a single hunting tag, using night-vision equipment, chasing down wolves on snowmobiles and ATVs and shooting them from helicopters. It also authorizes year-round wolf trapping on private property.

It's not clear if the expanded methods and seasons to kill wolves would reduce the wolf population to 150. Republican state Rep. Fred Wood, a former member of the Idaho Fish and Game Commission, said the only way to do that would be to use poison, which is not in the new law.

However, hunters have said night-vision scopes, now allowed, could significantly increase the number of wolves killed. But the threatened lawsuit cites possible deaths of grizzly bears and lynx from expanded trapping and snaring of wolves.

The state Department of Fish and Game reported in February that the wolf population has held at about 1,500 the past two years. The numbers were derived by using remote cameras and other methods.

About 500 wolves have been killed in the state in each of the last two years by hunters, trappers and wolf control measures carried out by state and federal authorities.