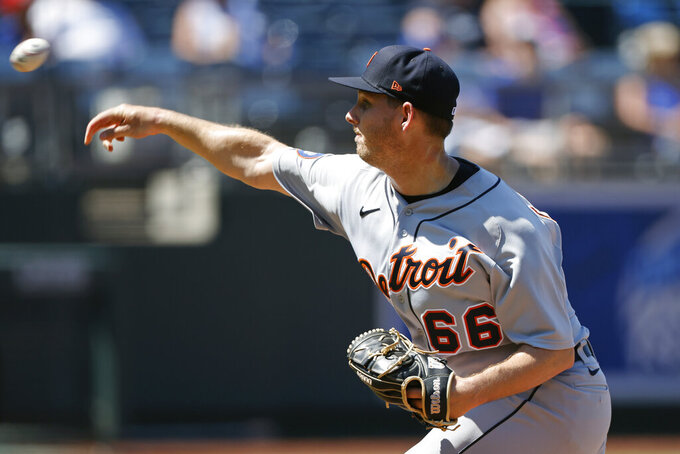 KANSAS CITY, Mo. (AP) — Brady Singer won for the first time in over a month as the Kansas City Royals beat the Detroit Tigers 5-2 to earn their first winning homestand in nearly a year.

“A lot of big jams that I had to get out of,” Singer said. “That was something I’m more happy with, getting out of those. Command was tough today. Didn’t have it, obviously, a lot of walks.”

The Tigers loaded the bases with no outs to start the game but scored only one run via Harold Castro’s sacrifice fly.

“That’s one of his best because the really good ones figure out ways to minimize the damage when they don’t have your good stuff,” Royals manager Mike Matheny said. “He didn’t have his good stuff. The fine execution wasn’t there and the next thing you know he’s in tough, tough spots, and works his way out.”

Detroit opened the fourth with three consecutive singles, but the rally was stifled when Jonathan Schoop was thrown out trying to score by right fielder Edward Olivares.

Schoop was initially called safe; the call was overturned after a short review.

“I could feel myself tag him,” catcher MJ Melendez said. “I couldn’t tell where, but I knew I touched him before he got to the plate, so I pointed at the dugout and said, ‘You guys have to challenge that one.’"

Singer walked the bases full in the sixth, then struck out Spencer Torkelson and Akil Baddoo to end the threat.

“Obviously we didn’t do enough with our opportunities,” Tigers manager A.J. Hinch said. “You’d like to get a little bit more early.”

Scott Barlow worked the ninth for his 15th save.

With series wins against Cleveland and Detroit, the Royals concluded their first winning homestand since July 23-29 last year.

“It’s confidence,” Matheny said. “As long as guys can continue to have some success, it builds their belief in themselves and each other. It just creates a better atmosphere and that’s what it did today. It’s fun to finish off a really good homestand.”

Benintendi, named to his first All-Star Game this week, scored ahead of Emmanuel Rivera’s RBI double during a four-run fourth inning.

“There were a couple of bleeders that got through that innings and some balls that weren’t hit that hard,” Benintendi said. “I think against a guy like (Skubal), just putting the ball in play and making them make a play sometimes things start to go your way a little bit.”

Rivera extended his hitting streak to a career-best 11 games.

With the bases loaded, Olivares reached on Schoop’s error as two crossed the plate.

“We made a mess of the inning in the fourth,” Hinch said. “One error, but four miscues. It’s hard to win games when you do that.”

Hunter Dozier added an RBI triple the following inning against Tarik Skubal (6-7), who is 1-6 in his last seven starts while posting a 7.46 ERA.

“I think we’ve been swinging the bats well,” Dozier said. “Today was a big game to get the series win. A pretty good job getting the guys in and finding a way to get the win.”

“He had really good stuff today,” Matheny said. “That’s … obviously, a different fastball than we’ve seen. The ball was just exploding out of his hand.”

TEN DOWN FOR TORONTO

The Royals will be without 10 of the 26 players on their active roster for their upcoming trip to Toronto due to Canadian restrictions on travelers who aren’t vaccinated against COVID-19.

Matheny said the club will be without hitters Benintendi, Dozier, Cam Gallagher, Kyle Isbel, Melendez, Whit Merrifield and Michael A. Taylor along with pitchers Dylan Coleman, Brad Keller and Singer.

The team is set to play four games in Toronto. The 10 players will be placed on the restricted list and forfeit four days of pay and major league service time in accordance with the terms of MLB’s collective bargaining agreement.

The Tigers begin a four-game series in Cleveland Thursday. RHP Elvin Rodriguez (0-2, 11.51 ERA) will be recalled from Triple-A Toledo to make the start opposite RHP Tristan McKenzie (6-6, 3.47).

The Royals begin a four-game series in Toronto on Thursday. Probable starting pitchers have not been announced.