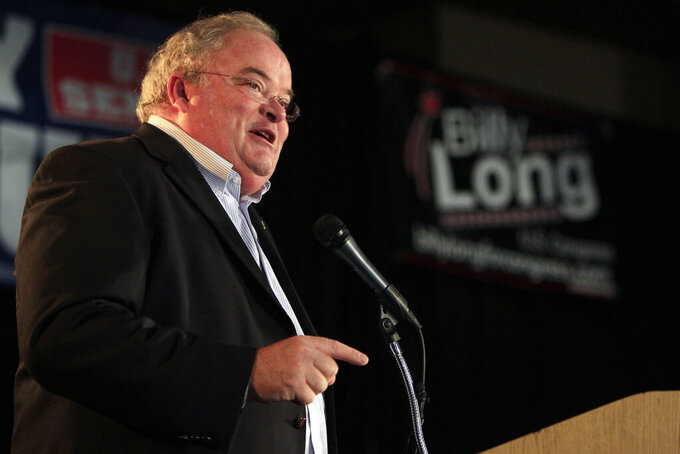 Jeff Roberson, ASSOCIATED PRESS
FILE - In this Nov. 2, 2010 file photo, then Missouri Republican Represnative-elect Billy Long speaks to supporters at an election-night rally in Springfield, Mo. Long, a conservative from southwestern Missouri, is entering the crowded race for the Republican nomination for U.S. Senate in Missouri. (AP Photo/Jeff Roberson, File)

U.S. Rep. Billy Long, a conservative from southwestern Missouri, is entering the crowded race for the Republican nomination for U.S. Senate in Missouri.

Long, 65, announced his Senate bid Tuesday night on Tucker Carlson's show on Fox News. He joins a long list of GOP candidates seeking the 2022 nomination for the seat being vacated by incumbent Republican Roy Blunt, who announced in March he would not seek a third term.

“We need to get the Senate back,” Long told Carlson. “You’re not going to do anything until you get the Senate back and I’m the guy that can win that Senate seat in Missouri and make sure that we don’t have a big race there, where we can take funds and put in Arizona and Georgia and these other seats that we need to take back.”

The decisions by Long and Hartzler carry some risk since both would be heavily favored to keep their seats in Congress if they ran again.

Long was first elected to Congress in 2010. He has been a staunch supporter of former President Donald Trump. Royce Reding, a campaign adviser to Long, confirmed Wednesday that Long met with Trump on Tuesday. A news release from Long's campaign said he has hired longtime Trump adviser Kellyanne Conway as an adviser and pollster.

St. Louis University political scientist Ken Warren said members of Congress generally lack name recognition beyond their own districts, and that’s an obstacle both Long and Hartzler would have to overcome. But he noted that an endorsement from Trump, who remains popular in Missouri, would be a big boost.

“That would help a lot if he (Trump) gets behind only one person,” Warren said. “But Trump’s endorsement does not mean the candidate’s going to have an automatic win.”