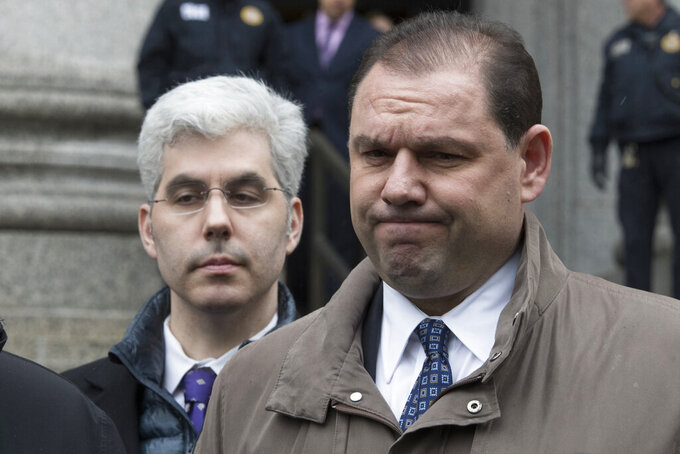 NEW YORK (AP) — The conviction of one of ex-New York Gov. Andrew Cuomo’s top aides for fraud and accepting bribes was affirmed by a federal appeals court Wednesday.

The 2nd U.S. Circuit Court of Appeals in Manhattan said the case against Joseph Percoco required it to again consider the reach of federal fraud and bribery laws.

Percoco, 52, was a longtime friend and top aide to Cuomo, a Democrat who recently resigned as governor amid sexual harassment allegations.

The appeals court also upheld the conviction of Steven Aiello, 63, a Syracuse real estate executive who was sentenced to three years in prison for his role in funneling bribes to Percoco to gain his influence in an ambitious Buffalo Billion development project aimed at encouraging economic development upstate.

Percoco, convicted of accepting over $300,000 from companies seeking to influence the Cuomo administration, was sentenced to six years in prison. He is scheduled to be released in April 2024.

The scandal was a multi-year black cloud over the Cuomo administration and was frequently cited by critics as proof that Cuomo failed to address chronic corruption in state government, even within his own administration.

In a decision written by 2nd Circuit Judge Richard J. Sullivan, a three-judge appeals panel rejected arguments that a jury at a 2018 trial was improperly instructed on the law by a judge who improperly concluded there was sufficient evidence for convictions.

The 2nd Circuit said it was successfully proven that Percoco accepted bribes and promised to perform official actions to further the interests of an energy company, Competitive Power Venture. And it said prosecutors had proven that Percoco, in a second scheme, agreed with Aiello to advance the interests of Aiello's real estate development company, COR Development Co.

The appeals court agreed with lawyers for Percoco and Aiello that a judge's bribery instructions to the jury fell short of the legal standard that was recently clarified in another New York state corruption case, but it said the error was harmless and the jury would have convicted anyway.

Prosecutors declined through a spokesperson to comment. Messages seeking comment were sent to lawyers for Percoco and Aiello, who has not yet reported to prison.

Trial evidence overwhelmingly showed that Percoco and his co-conspirators understood that payments to Percoco's wife for a low-show job as an “education consultant" were in exchange for his help in getting energy company CPV a deal requiring New York state to purchase power from the company, the 2nd Circuit said.

In an amusing moment at trial, the payments were described in coded communications between the co-conspirators in 2012 as “ziti," a reference to how payoffs were described by characters on the award-winning HBO series “The Sopranos."

The COR Development scheme developed while Percoco was temporarily managing Cuomo's reelection campaign in 2014. The 2nd Circuit said evidence showed Aiello arranged for his company to pay Percoco to take actions to benefit the company.

Prior to leading Cuomo's reelection campaign, Percoco was executive deputy secretary to the governor, a position that gave him power over Cuomo's budget, personnel decisions and operations and a significant role in overseeing labor relations, government affairs and legislative affairs, the appeals court noted.