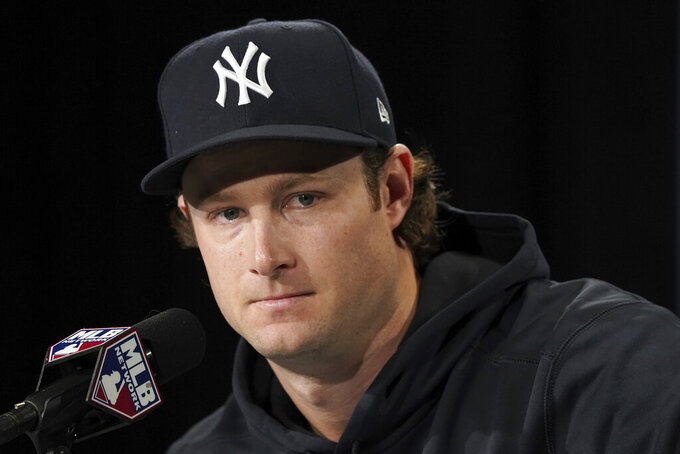 A look at the American League wild-card game between the New York Yankees and Boston Red Sox:

October Glance: A streaky team, the Yankees won 13 in a row in August and then lost 11 of their next 13. ... Left with a batting order that was right-handed dominant following a season-ending wrist injury to switch-hitting center fielder Aaron Hicks that required surgery in May, the Yankees transformed their lineup ahead of the July 30 trade deadline by acquiring a pair of left-handed bats: 1B Anthony Rizzo from the Chicago Cubs and OF Joey Gallo from Texas. ... Chapman struggled with control and command for parts of the season following a lights-out start, and the Yankees lost bullpen depth when LHP Zack Britton injured his pitching elbow in August and needed Tommy John surgery. 1B Luke Voit, the 2020 major league home run champion, lost his starting job to Rizzo and will miss the postseason with left knee inflammation. DJ LeMahieu, the 2020 AL batting champion, is on the injured list with a sports hernia. ... C Gary Sánchez struggles defensively and Gleyber Torres was moved from shortstop to second base in September because of poor defense. ... The starters in the wild-card game squared off Sept. 24, when Cole beat Eovaldi 8-3 at Fenway Park in the opener of the final regular-season series between the longtime rivals.

October Glance: Red Sox and Yankees have met in the postseason four times, with New York winning in the 1999 and 2003 AL Championship Series and Boston winning in the 2004 ALCS and 2018 Division Series. In games, the Yankees lead 12-11. ... New York also won a famous one-game tiebreaker for AL East title at Fenway Park in 1978, which is considered a regular-season game. ... The Red Sox return to the playoffs for the first time since winning the 2018 World Series. They finished fifth in the AL East in the pandemic-shortened 2020 season, making it the third time they have rebounded from a last-place finish to make the postseason. ... It is their first wild-card berth since 2009, before the current one-game playoff was instituted in 2012. ... Led the division from April 8 to May 23, from June 19-23 and June 27 to July 30, a total of 84 days. ... Swept at home by Yankees from Sept. 24-26 to fall into third place but swept the Nationals in final three games of season to clinch top wild card. ... Scored 334 of their 829 runs this season with two outs, most in the majors. ... Led the majors with 330 doubles. ... Six players had at least 20 homers, including Bobby Dalbec (25) and Kiké Hernandez (20). ... Eovaldi pitched six scoreless innings in his last start, against Baltimore on Sept. 29. The Red Sox have won seven of his past eight. He leads all AL qualified pitchers with 1.79 walks per nine innings, ranks second with 5.57 K/BB and seventh with 195 strikeouts.