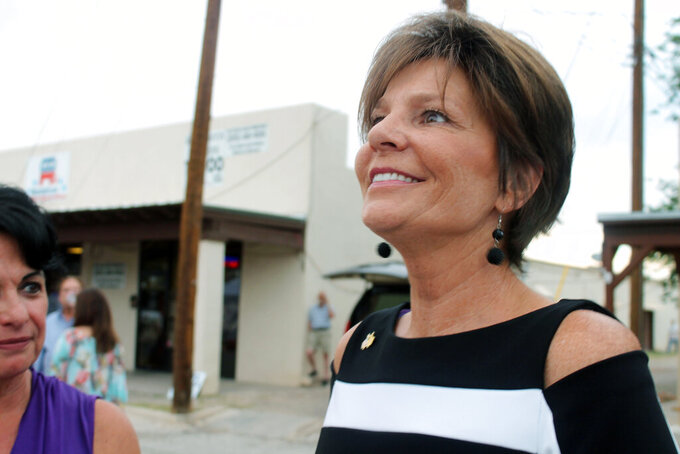 Jacqueline Devine, ASSOCIATED PRESS
FILE - In this June 5, 2018 file photo, then-State Rep. Yvette Herrell is shown in Alamogordo, N.M. Herrell is emphasizing the vetting process for Afghan refugees and security concerns, Tuesday, Sept. 7, 2021, as she embarks on a tour of resettlement operations at an Air Force base on the outskirts of her home town in southern New Mexico. (Jacqueline Devine/Daily News via AP, File)/

The committee is forging toward an Oct. 15 deadline for outlining redistricting map proposals that will inform the Legislature's decisions later in the year.

As of Thursday, the Citizens Redistricting Committee was still waiting to receive crucial recommendations from alliances of Native American communities. New Mexico has 23 federally recognized tribes.

“These concepts are built largely on the testimony we received," said Edward Chávez, a former state Supreme Court justice and chairman of the redistricting committee. “The public is still going to have the opportunity to comment on each of these concepts, to actually take one of these concepts and modify it.”

The actual line-drawing will be done by the state's Democrat-led Legislature, which could hew to the committee's recommendations — or ignore the suggestions and use its overwhelming majorities to create districts that help Democrats win elections for years to come.

States, including New Mexico and Indiana, are using citizen advisory boards on redistricting to temper political inclinations without taking powers away from state lawmakers. Judges might wind up using the advisory maps to resolve redistricting lawsuits.

The New Mexico Legislature plans to convene in December to redraw boundaries for the state's three congressional districts, 112 legislative seats and a public education commission that oversees public charter schools.

The citizens committee advanced seven concepts for reshaping congressional districts. They all retain a compact central district in and around Albuquerque, with two sprawling districts that span the north of the state and the south.

“There was a significant population who spoke about maintaining the core of the existing districts, a lot of Hispanics from the north talking about northern New Mexico and the common culture of Native Americans and the Hispanics” said Brian Sanderoff, a pollster and consultant on the redistricting effort. “We heard people from Albuquerque saying that it is a community of interest.”

This year marks the first time in at least 30 years that the redistricting process in New Mexico has been overseen by both a Democrat-led Legislature and Democratic governor. Republicans control the process in 20 states, including Florida, Texas and North Carolina.

The once-a-decade redistricting process has ramped up with the recent release of 2020 census data showing how populations have changed in neighborhoods, cities and counties since 2010.

U.S. House and state legislative districts must be redrawn to rebalance their populations. But mapmakers can create an advantage for their political party in future elections by packing opponents’ voters into a few districts or spreading them thin among multiple districts — a process known as gerrymandering.