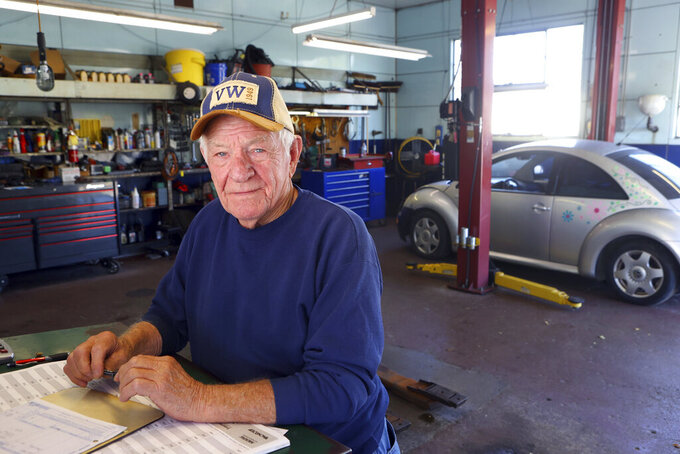 KOKOMO, Ind. (AP) — Dick Bougher remembers when the local Chrysler plants had large signs in the parking lots banning foreign cars from entering. He remembers when people would sometimes flip over a Volkswagen if they saw it parked downtown.

And that’s right at the time when he decided to open a foreign-car repair shop in Kokomo.

Bougher opened the shop on June 2, 1970, with his partner, Walter Balg, a native of Germany who once was held in a prisoner of war camp in the U.S. during World War II.

Fast forward to today, and the 83-year-old Greentown native is still fixing vehicles at Dick and Walt’s Foreign Car Repair, located in a former filling station at 1301 Home Ave. And after 51 years in business, he has no plans to stop anytime soon.

“The ambulance will have to pull up in front here and pick me up,” Bougher said.

These days, it’s more likely to see a Toyota or Honda driving in Kokomo than a Chrysler, and the attitude towards foreign car companies has changed dramatically from when Bougher opened the business.

But the repair shop hasn’t changed at all.

The small, two-bay garage still has the old tire racks attached to the wall from when it was a gas station. Bougher still uses one of the same lifts he had installed 51 years ago, along with the machine he uses to clean and test spark plugs.

An old vending machine in the waiting area sells Coke in a glass bottle for 50-cents, but his long-time customers know where he hides the key and can get a free one anytime they want.

“Most of the people now aren’t just customers,” Bougher said. “They’re friends. I know their kids and their backgrounds and if a daughter in-law had a baby.”

Over the last half century, Bougher has become a fixture in the local auto repair community known for his top-notch work, laidback philosophy and never-met-a-stranger personality.

But when he opened the shop in 1970, foreign-car repair was still in its infancy and a potentially risky venture. Bougher figured if anyone could pull it off, it was him and Balg.

After all, Balg was German and had experience working on Volkswagens, and Bougher learned how to fix the engines when he was stationed in Germany on an Air Force base that used Volkswagen trucks.

After that, they both ended up working at Kokomotors, the Volkswagens dealership in town that was the only foreign car company in Kokomo at the time. That’s were the two met and became friends.

When workers there went on strike for weeks in an effort to unionize, Bougher and Balg decided to leave and start their own shop. After all, they knew just about everyone in the city who owned a Volkswagen.

The two saw the filling station on Home Avenue was up for sale, so they moved in and opened up the shop.

Bougher said during the early days of the business, they serviced almost exclusively Volkswagens, since those were the only foreign cars in town. He said they fixed a lot of Beetles and the iconic vans that became a symbol of the Hippie movement.

“I never, ever had a hippie cheat me out of money,” he said “Some of them were seedy looking people, but they’d always pay you.”

It didn’t take long for Hondas and Toyotas to start appearing on the roadways, and soon they were fixing those, too. Then came Nissans, BMWs, Mercedes and every other major foreign car brand. Before long, the shop was humming with business.

In 1990, Balg retired from the shop, but Bougher wasn’t ready to quit. He bought out his partner’s share and kept the business going.

“I never did change the name,” he said. “That just confuses people when you do stuff like that.”

In all that time, Bougher never had any aspirations to expand or grow the business. It made enough money to pay the bills, support his family and he liked it just the way it was.

“If you got twice the bays, you’ve got twice the headaches,” he said. “It’s about KISS: Keep it simple, stupid. The bigger you are, the more money you make. But how much money do you need? I gave up trying to be a millionaire years ago.”

Bougher has that same philosophy at 83. After more than 60 years working on cars, he’s decided to be pickier about what kind of vehicles he works on. He said he stays away from new BMWs and Mercedes because the technology has gotten so complex. He also closes the shop on Fridays.

“I’m at the age where I’ve done this for 60-plus years, so why not close down on Fridays?” Bougher said.

He said he still loves fixing cars, but these days, the best part of coming to work is simply chatting with customers and shooting the breeze with people about politics, their families or just about any topic under the sun.

“That’s half of why you come back every day,” Bougher said.

And coming to work every day is something he plans to do as long as his health holds out. Bougher said after more than five decades servicing foreign cars at his shop, it’s simply in his DNA to keep the business going.

“It’s just part of you after that many years,” he said. “It defines who you are. This is what I do, and I’m sure when people see me, they think of me as the car repair guy.”