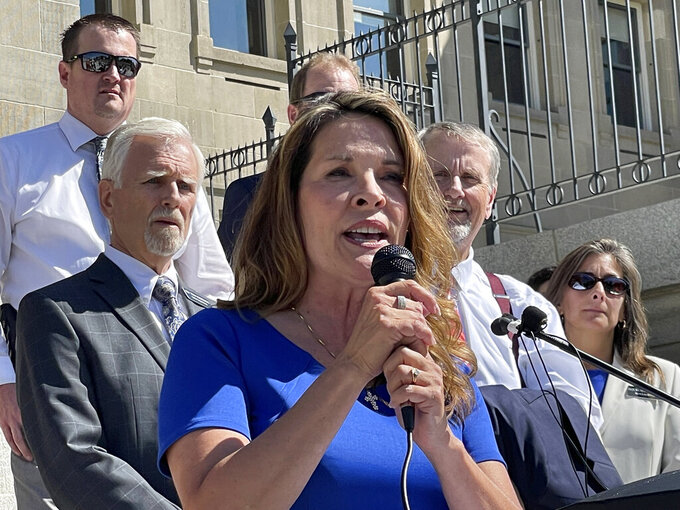 BOISE, Idaho (AP) — An attempt by far-right lawmakers Wednesday to form a quorum at the Statehouse that they say would have allowed them to force the Legislature to reconvene and pass laws to prohibit vaccine mandates fizzled when only 16 of the 70 House members showed up.

Twelve Republicans held a rally on the Statehouse steps in front of about 150 vocal supporters before they were joined by four others on the House floor to discuss at least seven proposed bills. No Democrats took part, and one of the 12 Republicans at the rally appeared to skip the meeting on the House floor as well.

“If we can't stop the government from injecting us with anything, it's no longer a threat, it's happening,” Republican Rep. Vito Barbieri told the crowd who yelled in support. “Justice has outright failed us. We must stay engaged against all odds.”

Republican Lt. Gov. Janice McGeachin, who is running for governor, also addressed the crowd, calling for the Legislature to reconvene.

“It is not the place of any business, any governor or any president to dictate to us what we do with our bodies,” she said amid cheers. “This is all about freedom and liberty.”

Many Idaho Republican lawmakers are angry with the vaccine mandate that President Joe Biden announced last week, and some want the Idaho House and Senate to reconvene to outlaw such mandates.

The sweeping new vaccine mandates affect 100 million Americans, requiring that employers with more than 100 workers require the workers to be vaccinated or be tested for the virus weekly.

Workers at health facilities who receive federal Medicare or Medicaid will also have to be fully vaccinated, as well as employees of the executive branch and contractors who do business with the federal government.

One of the four Republican lawmakers who didn't take part in the rally but attended the meeting on the House floor was Republican Rep. Sage Dixon, co-chair of the Committee on Federalism, which contains both representatives and senators. The committee deals with state sovereignty issues.

Dixon said the committee will consider some of the proposed bills from Wednesday and hopes to have a bill ready so that, if enough lawmakers in the House and Senate agree, the Legislature could reconvene in late October or early November.

“It’s critical we have the buy-in from the Senate. Otherwise we don’t go anywhere," Dixon said. “We could reconvene as a House and force them (the Senate) in in three days, but then we’re just going to hit a wall over there.”

The House earlier this year only recessed rather than officially adjourning, while the Senate adjourned. House members contend that the House can force the Senate back if the House reconvenes.

Under a resolution the House passed earlier this year when it recessed, rather than adjourning, only Republican House Speaker Scott Bedke can reconvene the chamber.

Republican Senate Pro Tempore Chuck Winder would likely have to be onboard as well to get the Senate back in session.

But the two lawmakers have said they are not so far inclined to do that. Bedke has said he will only reconvene the House if there's widespread support for specific legislation.

Lawmakers taking part in the House meeting presented draft bills and responded to a few questions. The bills sought to ban or nullify vaccine mandates in various ways, including making forced vaccines a criminal offense by defining it as an assault.

The lawmakers planned to meet again at 9 a.m. Thursday to see if more House members showed up to form a quorum.