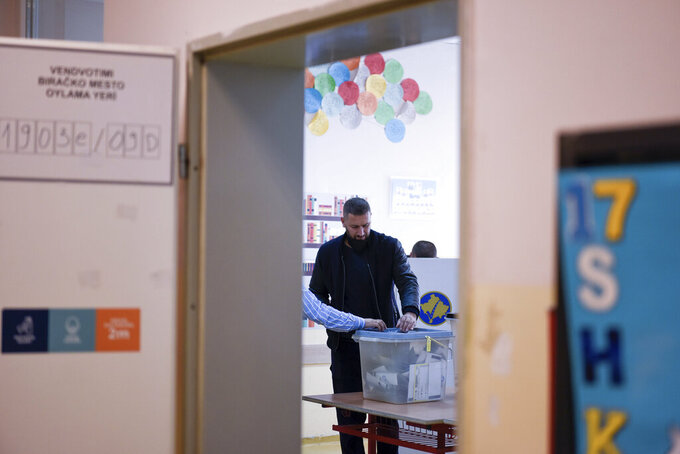 PRISTINA, Kosovo (AP) — Preliminary results on Monday show that the center-right opposition parties have dominated in Kosovo’s municipal elections but more than half of communes will go to runoffs in a month's time.

About 1.9 million voters in the small Balkan nation were electing mayors for 38 municipalities and about 1,000 town hall lawmakers. Election officials said preliminary turnout was 42.5%, slightly less than four years ago.

With almost all the vote counted, preliminary results published online by the Central Election Commission showed that 21 communes will need a runoff in a month to elect their mayors.

The governing left-wing Self-Determination Party, or Vetevendosje!, of Prime Minister Albin Kurti has won no mayoral post so far, though it is ahead in the capital Pristina where it had nominated its former health minister, Arben Vitia. Pristina, too, goes to a runoff.

The Srpska List party of Kosovo’s ethnic Serb minority, which is close to the Serbian government in Belgrade, has won the 10 seats in northern Kosovar communes. A Turkish minority party won another commune.

The past two months have seen soaring tensions between Serbia and Kosovo, a former Serb province with a majority ethnic Albanian population which declared independence from Serbia in 2008. Serbia has not recognized the move.

International observers will issue a preliminary report Tuesday on the vote.