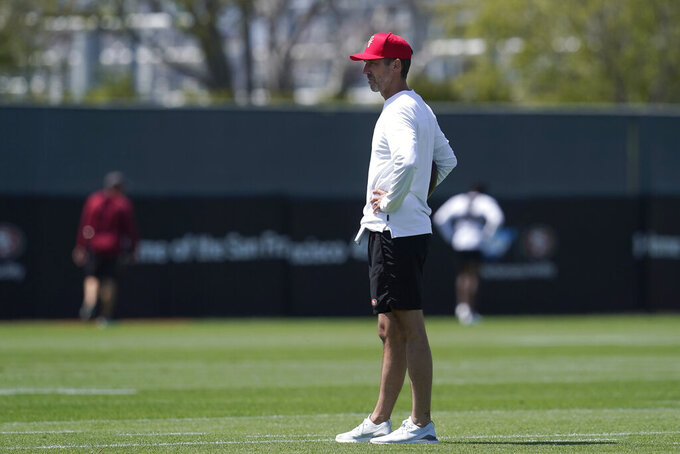 All-Pro receiver Deebo Samuel ended his offseason holdout by reporting for the first day of mandatory minicamp for the San Francisco 49ers.

Samuel had skipped the voluntary portion of the offseason after telling ESPN in April that he wanted to be traded but showed up Tuesday for the start of the three-day minicamp. Skipping the camp could have led to a fine of nearly $100,000.

Samuel wasn't the only star player who returned to the Niners for the mandatory portion of the offseason, with All-Pro left tackle Trent Williams and star edge rusher Nick Bosa also rejoining the team this week.

Samuel ran on the side during practice, while Bosa and Williams only took part in individual drills.

Coach Kyle Shanahan said he was happy to have Samuel back with the team and said their relationship remains strong.

“I know we go through the business part of this league, but I don’t think the relationship was ever too far away to not get it back to normal and I think we’re working on that,” he said. "Anytime you’re away from each other for a while, that’s always harder, but it’s good to get him back in here and start getting him around the guys again.”

Quarterback Jimmy Garoppolo did not join the team this week as he was given permission to skip the minicamp as he rehabilitates from shoulder surgery. The Niners are seeking to trade him as they are handing the starting job to Trey Lance.

Williams and Bosa typically work out on their own during the offseason and were expected to be at minicamp. The situation surrounding Samuel has been less certain ever since he made his trade request public before the draft.

Shanahan and general manager John Lynch have been consistent in saying they had no interest in trading Samuel and hoped to be able to keep him long term with a new contract.

Samuel is entering the final year of the rookie deal he signed after being drafted in the second round in 2019 and is looking to take advantage of the exploding market of receiver contracts.

Samuel is set to be paid nearly $4 million this season after being a first-team All-Pro in 2021. There are now 14 receivers with an average annual contract of at least $18 million, with nine of those deals being signed this offseason.

"I love our relationship with Deebo and hopefully that’ll help us be able to solve this contractually before we get to the season,” he said.

Samuel emerged last season as one of the most dangerous offensive players in the game with the unique ability to thrive as both a running back and a receiver in Shanahan’s offense.

Samuel had 77 catches for 1,405 yards and six touchdowns, leading the NFL with 18.2 yards per reception. He added 59 carries for 365 yards and eight TDs as he was used out of the backfield frequently in the second half of the season.

Bosa is also in line for a new contract as the second overall pick in 2019. San Francisco picked up a $17.9 million option on Bosa's deal for 2023 but would like to reach a long-term agreement this offseason.

Shanahan said talks haven't started yet between the two sides but that he believes a deal will be reached.

“I fully expect Nick Bosa being here for a very long time,” Shanahan said. "But seeing him for the first time in a while, Nick always takes care of himself as good as any athlete I’ve ever been around. He had a good Florida tan seeing him yesterday. His quads are still huge and he’s ready to play football whenever it’s time to go.”

NOTES: DE Dee Ford was also excused from minicamp and Shanahan said he won't be on the team this year after playing only 152 defensive snaps the past two seasons because of injuries. ... Third-round WR Danny Gray will miss practice this week after tweaking his hamstring last week. ... The Niners will hold joint practices with the Vikings in Minnesota before their exhibition game on Aug. 20.