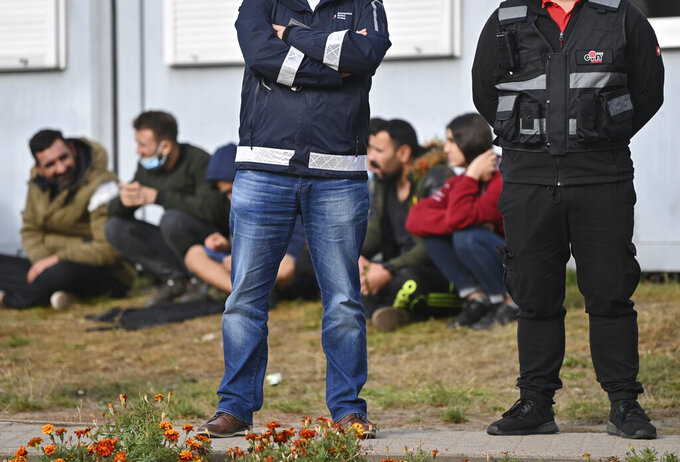 Patrick Pleul, ASSOCIATED PRESS
FILE-In this Oct. 6, 2021 taken photo security guards stand in front of migrants at the Central Initial Reception Facility for Asylum Seekers (ZABH) in the state of Brandenburg in Eisenhuettenstadt, Germany. German authorities say that the number of migrants arriving in the country via Poland and Belarus has gone up quickly during recent months. (Patrick Pleul/dpa via AP)

BERLIN (AP) — German authorities said Wednesday that the number of migrants arriving in the country via Poland and Belarus has gone up during the months that several European Union nations have accused the Belarusian government of encouraging people to cross into the EU from its territory.

Germany's federal police said that from January to July this year, 26 people traveling by the “Belarus route” arrived in Germany without authorization. The number grew to 474 in August, 1,914 in September and 1,934 during the first 11 days of October, the federal police said.

Most of the newcomers were being put up at asylum reception centers in the eastern state of Brandenburg. The centers can house 3,500 people, and authorities have added tents to make space for up to 5,000.

“The situation is not dramatic, but it is tough,” said Olaf Jansen, head of the foreigners' office in the eastern German town of Eisenhuettenstadt. There's concern the coronavirus might spread among the new arrivals, he said.

German Chancellor Angela Merkel is among the EU leaders who have joined Poland in accusing the government of Belarusian President Alexander Lukashenko of facilitating migration into the EU as a form of “hybrid war” in retaliation for EU sanctions.

Thousands of migrants have been lured to Belarus on tourist visas and encouraged to cross into Poland, Lithuania and to a lesser extent Latvia — all three EU nations that border Belarus.

Several recently died of exhaustion as they tried to get from Belarus to Poland across an area of forests and swamps.

The German government announced Wednesday that it was working on various measures to curb migration on the country's eastern border.

“There are currently consultations with our partners, both inside Germany and abroad, about measures to prevent the illegal migration to Germany,” Interior Ministry spokesperson Steve Alter told dpa. He did not give any further details.

In Poland, the government approved a bill late Tuesday that would regulate the construction of a high barrier with motion sensors on the border with Belarus to deter people from crossing over. It’s estimated cost is 1.65 billion zlotys ($407 million; 352 million euros). A vote by lawmakers could take place as soon as Wednesday.

Polish Interior Minister Mariusz Kaminski told state news agency PAP that the fence was necessary because “the number of attempts by illegal migrants to cross the border has not been going down despite the fact that there are more border guards, soldiers and policemen on the border.”

In 2015-2016, more than a million people fleeing war in the Middle East made dangerous journeys across the Mediterranean and Aegean Seas, seeking safety in Western Europe, and especially in Germany. But after their arrival, the EU installed drone surveillance and cut deals with Turkey and Libya to keep migrants away.

The far less protected path into the EU, through the forests and swamps of Eastern Europe, became a popular route after the EU imposed sanctions on Lukashenko and other Belarusian officials over their country's flawed August 2020 presidential election and a harsh crackdown on antigovernment protesters.

“The actions taken by the Alexander Lukashenko regime demanded a firm response from the Polish government,” Kaminski told PAP.

Poland's Border Guards agency said Wednesday that it registered 470 illegal border crossing attempts Tuesday, and prevented them all. The agency said that so far this month there have been 6,700 hindered attempts to cross the border, and 18,300 since the beginning of the year.