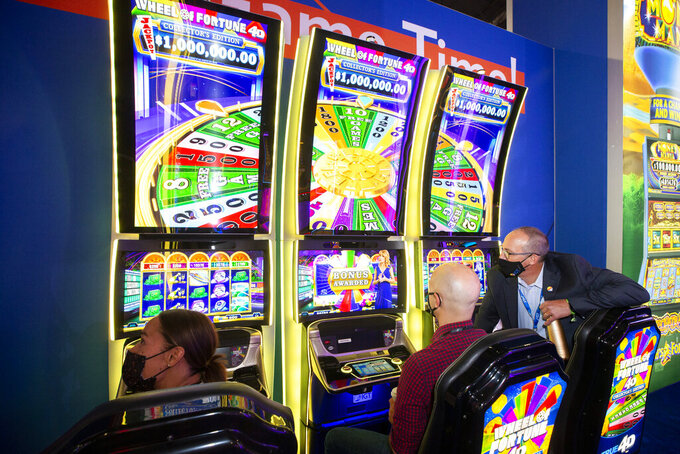 LAS VEGAS (AP) — Casino industry leaders and vendors riding a resurgence of gambling following coronavirus closures are gathering in-person for an annual conference this week in Las Vegas — amid strict coronavirus mask and vaccination rules — after meeting virtually a year ago.

“We are thrilled to be back here, live, in Las Vegas,” American Gaming Association chief Bill Miller said Tuesday as he greeted about 500 people in a ballroom. Chairs were spaced apart in groups of two, three and four at the Global Gaming Expo at The Venetian resort on the Las Vegas Strip.

“I mean, there’s nothing like getting back together in person,” Miller said, calling four days featuring an expansive trade show, breakout meetings and keynote speeches “a lot better than being on a Zoom (videoconference) call.”

The event at The Venetian Expo center has drawn up to 27,000 attendees in recent years. Gaming association spokeswoman Allison Nielsen said current attendance figures won’t be known until later this week.

Attendees submitted proof of vaccination, many through the cellphone app Clear Health Pass, and were issued green wrist bands to show they complied.

Nonsmoking advocates, in a separate event at the expo, highlighted successes they’ve had convincing lawmakers in some states and administrators of tribal lands around the country to make casinos smoke-free, and outlined efforts to get smoking banned in casinos in Nevada and, again, in New Jersey.

“Workers should never have to choose between a paycheck and their health,” said Cynthia Hallett, head of Americans for Nonsmokers’ Rights.

In Nevada, casino giant MGM Resorts International reopened the renovated Park MGM hotel, formerly the Monte Carlo, a year ago as the first smoke-free venue on the Las Vegas Strip. Many hotels ban smoking in rooms. But casinos are exempt under state law from public smoking restrictions.

“I couldn’t believe that after a year of fresh air, the smoke was coming back,” LaMont White, an Atlantic City, New Jersey, casino dealer for 36 years, told reporters Tuesday in Las Vegas. He said lawmakers should think of pregnant casino workers “forced to feed her unborn child secondhand smoke every day to make a living.”

“I think they see us as numbers on a bill or a bottom line,” White said, “not as human beings with families that love and depend on us.”

Nevada Gov. Steve Sisolak, a Democrat who ordered Nevada casinos and most other businesses closed from mid-March to June 2020, and U.S. Rep. Dina Titus, whose home district includes the Las Vegas Strip, were the morning’s featured speakers, talking about Nevada’s accelerating recovery from the COVID-19 pandemic.

Nationally, Miller reported last month that casinos had their best second quarter in history in April, May and June, taking in $13.6 billion and putting it on track to eclipse its best year ever: $43.6 billion in 2019.

Titus, a Democrat, the longest-serving Nevada lawmaker in Washington and a member of the Congressional Gaming Caucus, noted that hotel and casino closures in tourism-dependent Nevada drove the unemployment rate in the state to more than 30% in April 2020, the highest in the nation.

“We have come back,” she said of a figure that is now 7.7% but still higher than the national average.

Titus also credited businesses and casino owners who have required employees to be vaccinated or receive regular COVID-19 tests with helping to ensure that tourists, gamblers and conventioneers can visit her hometown and remain healthy.

“If they come here, that’s the thing I think that we have to really recover,” she said.

This story version corrects the last name of the gaming association spokeswoman to Nielsen, not Nielson.