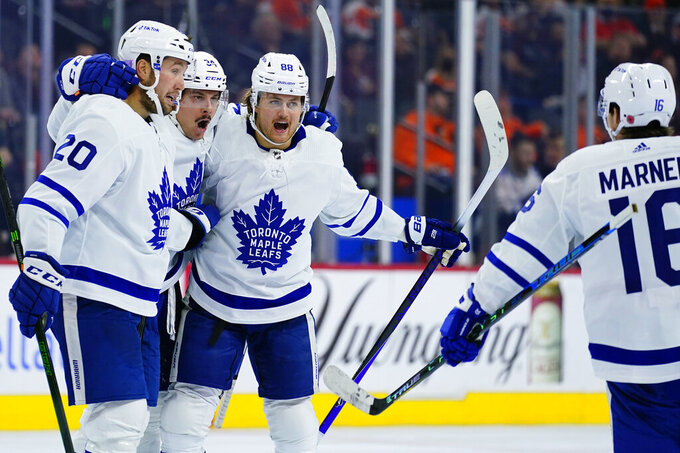 Ondrej Kase also scored and Auston Matthews had a pair of assists for the Maple Leafs, who were without injured captain John Tavares and won for the sixth time in seven games. Campbell got his sixth career shutout.

“Right from the get-go, you could tell we had a serious purpose out there and just executed the whole night,” Campbell said.

Carter Hart finished with 30 saves for the Flyers.

“They were playing a real solid game and it was tough to get those Grade-A chances,” Flyers coach Alain Vigneault said.

Nylander made it 1-0 with 8:49 left in the second period on a fluke goal. The puck deflected off his right toe and under Hart’s right arm after Jake Muzzin’s pass went off defenseman Travis Sanheim’s stick and high into the air near the crease. It originally was ruled no goal by the officials due to a kicking motion but overturned after video review.

“I didn’t really know if I kicked it or not,” Nylander said.

Nylander fired a wrist shot from the slot on the power play that beat Hart on the blocker side and made it 2-0 at 5:09 of the third. Matthews did the work down low and got the puck to Nick Ritchie, who passed to a wide-open Nylander in the middle of the ice. Nylander tied Tavares for the team lead with his seventh goal of the season.

“We’re buzzing as a line and creating a lot of chances,” Nylander said.

Kase made it 3-0 with 6:27 to play. Alexander Kerfoot outhustled Flyers defenseman Justin Braun, went behind the net and then beautifully set up Kase in the slot for a finishing wrist shot.

“Our effort from the puck drop was solid,” Matthews said.

Both teams were sloppy in the first period and Hart kept the game scoreless with several strong saves early in the second. He had a good pad stop from close range on David Kampf’s attempt 4 1/2 minutes into the middle period and another pad save on Matthews’ slap shot from the slot about 2 minutes later.

The Flyers’ offense heated up as well but couldn’t get past Campbell. Sanheim’s blast from the point 7 1/2 minutes into the period was turned away by Campbell’s blocker, and the Maple Leafs’ goalie used his left pad to deny Cam Atkinson’s slapper from the top of the circle on the power play.

“Everybody did their job,” Campbell said.

Maple Leafs: After playing in Monday’s 5-1 home loss to the Los Angeles Kings, Tavares didn’t practice on Tuesday with a lower body injury. He was deemed a game-time decision and participated in the morning skate on Wednesday but wasn’t able to go. He remained tied for the team lead with 13 points. Toronto coach Sheldon Keefe said afterward that Tavares is day-to-day.

Flyers: D Ryan Ellis (lower body) missed his eighth in a row but coach Alain Vigneault indicated on Tuesday that Ellis is getting closer to a return.

Flyers: At Carolina on Friday night.