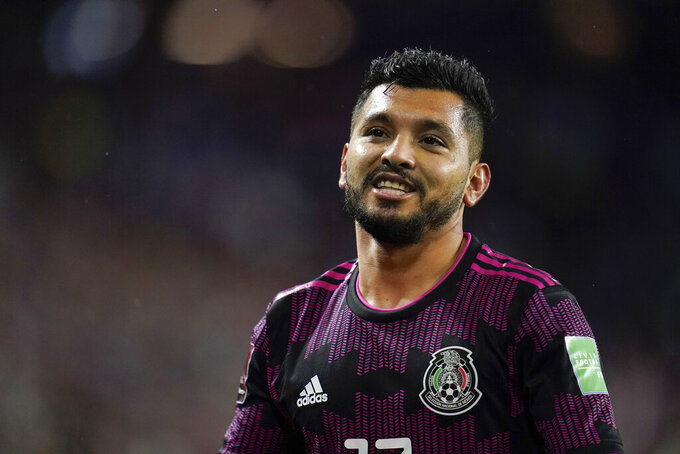 Julio Cortez, ASSOCIATED PRESS
FILE - Mexico's Jesus Corona looks on during the second half of a FIFA World Cup qualifying soccer match between Mexico and the United States, Nov. 12, 2021, in Cincinnati. Mexico forward Jesús “Tecatito” Corona is set to miss the World Cup because of a serious injury sustained while training with Sevilla on Aug. 18, 2022, according to the Spanish club. (AP Photo/Julio Cortez, File)

MADRID (AP) — Mexico forward Jesús “Tecatito” Corona is expected to miss the World Cup after breaking his left leg while training with Sevilla on Thursday, the Spanish club said.

Sevilla said Tecatito broke his left fibula and ruptured ankle ligaments and will be out for four to five months. The World Cup begins in Qatar on Nov. 20.

The 29-year-old Tecatito was taken to the hospital in an ambulance and underwent surgery later Thursday. Doctors inserted a plate and screws on his fibula and repaired his ankle ligaments, Sevilla said. He is expected to stay hospitalized for a couple of days.

The club said Tecatito sustained the injury by himself, without colliding with any other player.

“It doesn't look good,” Sevilla coach Julen Lopetegui said. “Unfortunately it's part of soccer and it happened to Jesús.”

México will play its opening World Cup match on Nov. 22 against Poland in Group C, which also includes Argentina and Saudi Arabia.

The Mexican soccer federation said it would give Tecatito as much time to recover as possible, and that it hoped the recovery time would shorter than expected.

Tecatito was a member of Mexico's World Cup squad in 2018 in Russia. He was expected to enter his second World Cup as a regular starter in the 4-3-3 scheme of Argentine coach Gerard Martino, who will now likely have to find a substitute for the injured player.

Uriel Antuna was Tecatito's natural replacement but he hasn't been playing well with Mexican club Cruz Azul. Another option for Martino could be Chivas forward Roberto Alvarado, who has been called up from time to time.

Tecatito signed with Sevilla from Portuguese club Porto in January.

Sevilla, which finished fourth in the league last season, was preparing to face Valladolid on Friday in its second match. The team opened with a loss at Osasuna.