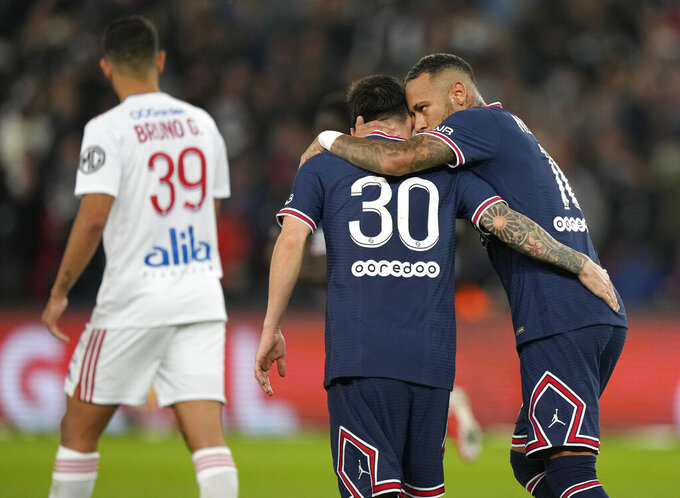 PARIS (AP) — Lionel Messi hit the crossbar with a curling free kick and looked angry at being taken off in the 75th minute in his home debut Sunday for Paris Saint-Germain.

Substitute Mauro Icardi scored deep into stoppage time as PSG scraped a 2-1 win over Lyon in the French league to make it six straight victories.

Messi stared sharply at PSG coach Mauricio Pochettino and appeared to snub a handshake as he came off. The six-time Ballon d’Or winner, who is still chasing his first PSG goal in his third appearance following his shock move from Barcelona, sat glum-faced on the bench.

As he was coming off, Messi made a gesture with his hands apart as if to say he didn't understand, and Pochettino attempted an explanation afterward.

“Everyone knows we have great players in the squad, we have 35 players. But we must make decisions for the good of the team. Sometimes they lead to a positive result and sometimes not,” Pochettino said through a translator. “These are decisions we need to take. Sometimes it pleases people, or it doesn’t. I asked him how he was, and he said he was fine.”

On the field, Icardi found space to head in Kylian Mbappe's precise cross from the left in the 93rd.

PSG fell behind in the 53rd when Brazil midfielder Lucas Paqueta finished neatly, after forward Karl Toko Ekambi picked him out with a low cross to the front post.

Neymar equalized from the penalty spot in the 66th after he was fouled by 18-year-old right back Malo Gusto.

Lyon coach Peter Bosz was unhappy with the call.

“It’s not Malo who fouls Neymar, it’s Neymar who puts his hand on him and fouls him,” Bosz said. “I can understand if the referee didn't see it, but then there is VAR.”

Lyon's long-serving president, Jean-Michel Aulas, went even further by calling the decision “an aberration” and saying the referee should have used video review.

Messi almost scored in the 32nd.

He found Neymar down the left and sprinted to meet Neymar's clever reverse pass, but goalkeeper Anthony Lopes read Messi's low shot well and denied him with his legs.

Four minutes later, Lopes was stuck to the spot as Messi hit the crossbar with a free kick from 25 meters.

Messi, whose last Champions League goal for Barca was away to PSG in last season's round of 16 return leg, also hit the bar in Wednesday's 1-1 draw at Club Brugge.

PSG is five points ahead of bitter rival Marseille, having played one game more.

Marseille earlier beat Rennes 2-0 to move into second place with striker Bamba Dieng getting his third goal in two games.

After Dieng turned in a cross from midfielder Pol Lirola in the 48th, substitute Amine Harit scored in the 70th after cutting in from the left flank.

Also, Amine Gouiri missed a late penalty as fifth-placed Nice was held to a 2-2 draw by visiting Monaco in a thrilling French Riviera derby.

Gouiri had the chance to make it 3-2 from the spot in the 82nd following a hand ball by defender Benoit Badiashile. But he missed the target.

After Nice forward Kasper Dolberg limped off with a knee injury, midfielder Aleksandr Golovin put Monaco ahead in the 39th from a right-wing cross by Gelson Martins.

Delort, who replaced Dolberg, equalized in the 50th as he headed in Gouiri's cross. Gouiri has four goals and two assists in six games.

Struggling Monaco is in 14th spot.

Angers dropped to fourth after losing 4-1 at home to Nantes for its first defeat this season.

High-flying Angers was brought down to earth when Nantes scored twice inside the first five minutes through Andrei Girotto and Ludovic Blas.

Captain Ismael Traore quickly pulled one back, but striker Randal Kolo Muani soon made it 3-1 and Blas added a late fourth for midtable Nantes.

Midfield schemer Teji Savanier grabbed an 87th-minute equalizer for Montpellier in a 1-1 draw at Troyes.

On Saturday, the match between Lens and defending champion Lille was interrupted for about 30 minutes after fans from the northern rivals clashed at halftime. Lens won 1-0.

The league’s disciplinary commission will meet on Monday to discuss the second high-profile incident of the season, after serious disorder at the Nice-Marseille game.