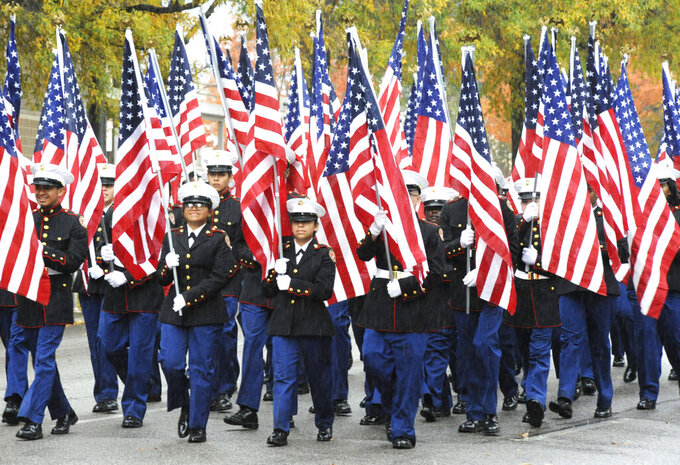 Jay Reeves, ASSOCIATED PRESS
Members of a ROTC unit march in the National Veterans Day Parade in Birmingham, Ala., on Thursday, Nov. 11, 2021. Billed as the nation's longest-running Veterans Day parade, the procession rolled through downtown after taking a year off because of the coronavirus pandemic. (AP Photo/Jay Reeves)

BIRMINGHAM, Ala. (AP) — A red, white and blue procession billed as the nation’s longest-running Veterans Day parade rolled once again Thursday despite dousing rain and gusty winds after taking a year off because of the coronavirus pandemic.

The crowd was not huge, possibly because of the blustery weather, but Clarence Turner brought his two young grandsons and an umbrella.

“I'm not a veteran. Actually, I was supposed to be at work today. I just took off to bring them down here so they can learn about the importance of the military and the veterans,” Turner said as the brothers, 8-year-old Terrence Todd and 9-year-old Lamar Todd, waved to marchers.

Retired Marine Maj. Donald D. Brooks, who retired in 1977 after 40 years in the service and then taught ROTC, was happy the parade had resumed but concerned about participants.

“I'm worried about my Marine color guard. They're going to get all wet,” said Brooks, who lives in Tuscaloosa County, before the start. “I going to get in the car behind us.”

More than 100 groups signed up to participate, down about 20 from most years, but Mark Ryan, president of the National Veterans Day Foundation, said organizers hoped tens of thousands will come out.

“Our goal is to show our veterans our special they are to us, not only individually but collectively,” he said.

Sgt. Maj. of the Army Michael A. Grinston, an Alabama native, served as grand marshal, riding in a covered vehicle to stay dry.

Thousands turned out for a parade in Mobile despite overcast skies, and Huntsville's parade stepped off earlier than planned because of the chance of storms.

Birmingham isn't the only place to claim its celebration of veterans is the nation's oldest. Leavenworth County, Kansas, dates its festivities back to the year after World War I ended, 1918, or nearly 30 years before the Birmingham event was established. And Emporia, Kansas, has been recognized as having the first Veterans Day event in 1953.

But the Veterans Administration credits Birmingham with having the first celebration to use the term “Veterans Day” in its title after World War II veteran Raymond Weeks organized “National Veterans Day” in 1947. President Dwight D. Eisenhower signed legislation changing the federal holiday from Armistice Day to Veterans Day in 1954.

The parade has been held annually, Ryan said, and organizers considered canceling it last year because of public health safety before opting for a virtual event that included video performances, salutes and video from past parades and was watched thousands watched online, he said.

“Smarter minds than mine came together and convinced me we had to have one,” said Ryan.

A dinner Wednesday night honored service members who participated in the response to COVID-19, which has killed more than 755,000 people in the United States, or more than the combined number of 673,687 U.S. service members who died from combat or other causes in both world wars, Korea, Vietnam, the two Gulf wars and the global war on terror that followed the attacks of Sept. 11, 2001.

Service members helped in the fight against COVID-19 by cleaning nursing homes, setting up testing stations and administering vaccines. “We’re honoring all of them,” said Ryan.