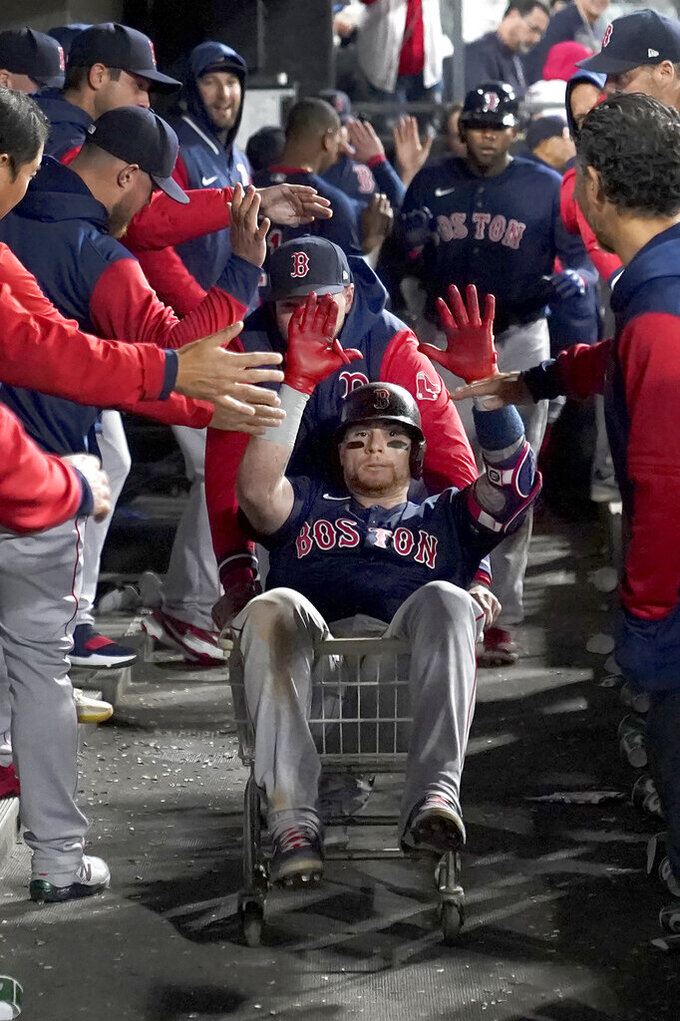 CHICAGO (AP) — Trevor Story and Christian Vazquez each hit a three-run home run and drove in four runs as the Boston Red Sox set season highs in runs and hits in a 16-3 win over the Chicago White Sox on Tuesday night.

Story’s homer off Dylan Cease capped a four-run first inning. Vazquez hit a three-run shot off Matt Foster to highlight a six-run sixth. Kike Hernandez hit Cease’s first pitch for a homer, and Rafael Devers led off the fourth with a homer off Jose Ruiz as the Red Sox extended their winning streak to six games.

“We’re working very hard to get to the next step,” Red Sox manager Alex Cora said. “We’re almost there, like reset the season and still believe we have a good team and can compete with the big boys in this division and the league.”

The White Sox fell for the fourth time in seven games.

“He’s been working so hard at it since Day One, and he’s getting a lot of opportunities and doing damage in the zone,” Cora said.

White Sox first baseman José Abreu hit his first home run since May 4, a two-run shot off Pivetta in the fourth. Tim Anderson had two hits, including an RBI single in the fifth.

The seven runs allowed by Cease (4-2) were his most since Aug. 29, 2019, when he surrendered eight against the Twins. Cease had his shortest outing since Sept. 11, 2021, when he lasted 2 2/3 innings against the Red Sox. Cease pitched five innings of one-run ball at Boston on May 7.

“They definitely had some comfortable swings in there,” said Cease, who wondered if he was tipping his pitches. “We’ll have to see. I don’t really want to say it’s one way or the other without knowing for sure. But it’s possible.”

Red Sox: Manager Alex Cora has not ruled out playing Martinez in the outfield. Martinez hasn’t played the outfield since 2021, when he appeared in 36 games. “Right now, the plan is not to play him for now, but probably at one point he’s going to have to play,” Cora said.

White Sox: OF Luis Robert was placed on the COVID-19 related injured list. “Certainly, he’s not going to play in the Boston series and very likely not going to play against the Cubs this weekend,” general manager Rick Hahn said of Robert, who was experiencing mild symptoms. … INF Jake Burger was promoted from Triple-A Charlotte and played the final three innings at second base for the first time in his career. … RHP Lance Lynn (right knee surgery) threw batting practice to OF Eloy Jimenez (right hamstring tendon tear) prior to Tuesday’s game, and Hahn anticipates both players will start a minor league rehab assignment within a week.

Red Sox: LHP Rich Hill (1-1, 3.90) will face the White Sox on Wednesday at Guaranteed Rate Field. Hill allowed four runs in two innings of a 12-6 win May 19 over the Mariners.