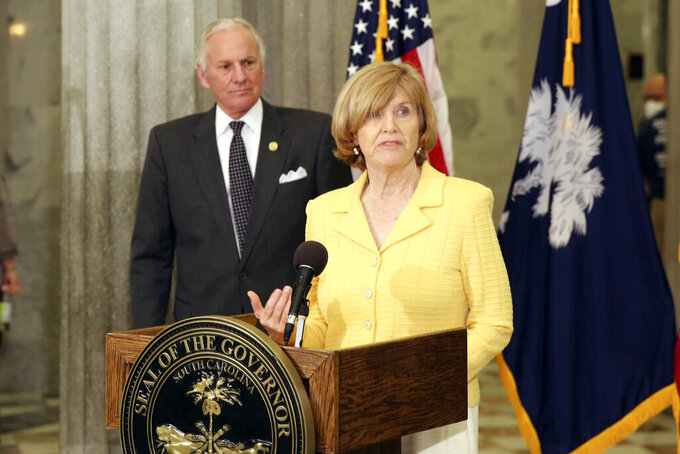 COLUMBIA, S.C. (AP) — South Carolina Education Superintendent Molly Spearman said Wednesday she will not run for a third term, saying after 40 years of service as a teacher, lawmaker and education official she wants to devote more time to her family.

Spearman, 67, made the announcement in a statement five months before filing for the 2022 election begins and 13 months before the election. She also said she plans to keep working up until her replacement is sworn into office.

“Until the end of my term in January 2023, I will continue to work diligently to help us rise out of the pandemic stronger than before while advocating for the needs of our students, educators, and families,” Spearman said.

A Republican, Spearman often clashed with lawmakers and others in her party. But she also pushed them toward her key issues — raising teacher pay and their morale, improving education standards and nearly finishing the goal of replacing every school bus in the state on a 15-year cycle, something started but never accomplished by her predecessors.

Spearman pushed for consolidating smaller school districts backing financial incentives passed by legislators. By the end of this school year, 11 districts will have merged into five, leaving the state with 73 traditional school districts in its 46 counties.

Spearman's state Education Department also took over three districts from local officials after too many schools were rated as underperforming.

“We retooled our system of school improvement ensuring that each struggling school and district had boots on the ground support day in and day out along with a plan of action for improvement. We helped small districts prepare for the future while expanding opportunities for students through shared services and consolidation,” Spearman said.

A provision in South Carolina's budget passed by the Republican-dominated General Assembly attempted to prevent districts from requiring masks, but has been temporarily overturned by a federal judge.

Spearman was elected superintendent in 2014 with 57% of the vote after making it through a eight-candidate Republican primary. She won a second four-year term in 2018 with no opponent in the primary or the general election after the Democratic candidate withdrew.

Spearman grew up on a dairy farm in Saluda County, starting her education career as a music teacher and assistant principal. She spent four terms in the South Carolina House before becoming an administrator at the state Education Department and executive director of the South Carolina Association of School Administrators.

“I am humbled that a little girl from a dairy farm in Saluda County has had the chance to serve her community and state for over forty years,” Spearman said. “My husband — Bill, children — Mitchell, Katie and Lee, and grandchildren — Molly Brooke and Marilyn Ann now deserve my full attention.”