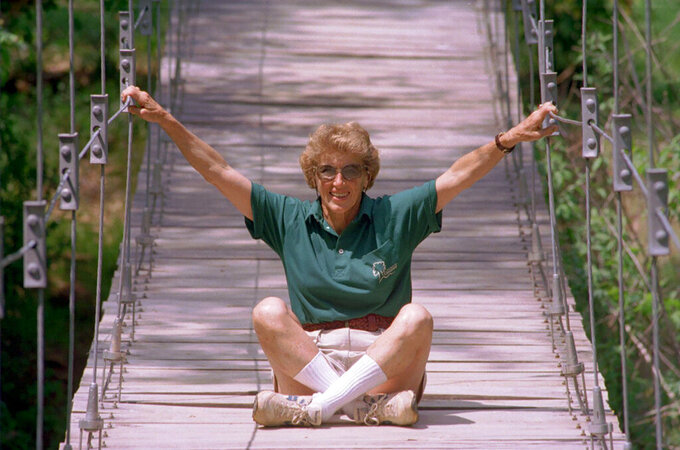 Layne Bailey, ASSOCIATED PRESS
Anne Springs Close sits over Steele Creek on a suspended bridge at her Anne Springs Close Greenway just north of Fort Mill, S.C., off of U.S. Route 21 bypass on April 20, 1995. Close who used her family’s textile fortune to give back to the community through education and land preservation has died at age 95. Close's family says she died Friday, Aug. 20, 2021, from injuries suffered when a tree branch fell on her at her property in Fort Mill, S.C., a few days earlier. (Layne Bailey/The Charlotte Observer via AP)

FORT MILL, S.C. (AP) — Anne Springs Close, who used her family's textile fortune to give back to the community through education and land preservation, died Friday. She was 95.

Close died from injuries suffered when a tree branch fell on her at her property in Fort Mill, South Carolina, a few days earlier, according to a statement from the Anne Springs Close Greenway, her crowning conservation achievement.

Close ended up as the sole heir of the Springs textile empire, which stretched across the Southeast decades ago when textiles were one of the region's main industry.

In the 1980s, as growth from Charlotte, North Carolina, spilled toward Fort Mill, Close joined with The Nature Conservancy and set aside 2,100 acres (850 hectares) of her family's land to be a greenway. She left aside 4,000 acres (1,620 hectares) for development.

“Most developers build first, and if there’s anything left over, they would make a green space. We did it the other way around. We made the green space first," Close said, according to the greenway's statement.

Close also gave money and time to numerous education and family projects close to home in Fort Mill and all over the world.

Close's family said she was the last living person to have flown across the Atlantic Ocean aboard the German airship Hindenburg. She ran the New York City marathon and after her eight children headed off to college, Close was appointed as the first woman on the Wofford College Board of Trustees, eventually becoming the chairwoman.

Close lost her eyesight from macular degeneration later in life, but climbed Mount Kilimanjaro in her 80s and Mount Washington in New Hampshire at age 88, a feat which she said nearly killed her.

After being hit by the branch, Close was still conscious at the hospital and tapped into her deep religious faith and sense of humor, her family said.

“I saved one too many trees," Close said.