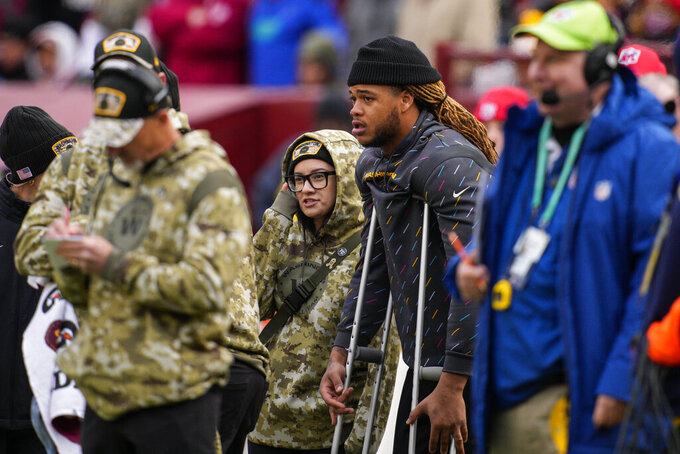 LANDOVER, Md. (AP) — As it is, Chase Young’s second year in the NFL was not going according to plan, including just 1 1/2 sacks and criticism from none other than Washington coach Ron Rivera.

Now the big question is whether Young’s season is over because of a torn ligament in his right knee.

The reigning NFL Defensive Rookie of the Year crumpled to the ground Sunday with a non-contact injury in the second quarter of Washington’s 29-19 victory over Tom Brady and the Super Bowl champion Tampa Bay Buccaneers.

“There’s some concern. We’ll have him evaluated tomorrow,” said Rivera, whose club ended a four-game losing streak and improved to 3-6. “Potentially an ACL, but we’re not sure yet.”

Young did not return to action against the Bucs (6-3) — although he did return to the scene, emerging from the tunnel and making his way to the home sideline while using crutches and wearing sweats midway through the third quarter.

“He was down a little bit, but being out there, being around his teammates, kind of helped,” Rivera said.

At halftime, Young spoke to his defensive teammates, telling them to keep playing as if the score were tied, even though the hosts led 16-6 at the break.

“Anytime he talks, we listen,” safety Kam Curl said. “He really inspires us, you know what I’m saying? That’s the dude we look to.”

The edge rusher got hurt while trying to get past left tackle Donovan Smith in order to pressure Brady. Young ended up on the grass, wincing and writhing around on the ground for a bit, all the while keeping his right leg straight.

After Young was checked by team trainers, a cart was driven out onto the field. But Young declined to get on and be driven off, instead motioning for teammate Brandon Scherff to give him a hand to help stand up.

Young then headed toward the locker room, draping his arms on the shoulders of two people for support while he limped off.

“Hopefully it’s not as bad as we think right now,” said Washington receiver Terry McLaurin, a college teammate of Young’s at Ohio State. “It’s hard to see a guy like that go down, because he’s a dominant player for us. He’s a leader for us.”

The No. 2 overall pick in the 2020 draft was dominant at times last season, drawing plenty of extra attention from opposing offenses while still managing to accumulate 7 1/2 sacks.

But Year 2 has been more of a slog for Young, who skipped some offseason team work while fulfilling endorsement obligations.

Rivera spoke during the week about having a conversation with Young to discuss areas where his play could improve.

“I said, ‘Look, you got to remember now, I know you want to make plays, but the thing you got to do is you’ve got to be patient, be disciplined and let the plays come to you.’ I went back and looked at all of his plays from last year. There’s a whole bunch of them. One thing that was really prevalent was you could see him sticking to the edge a little bit longer before he ducked inside,” Rivera said. “That’s one of the things I’d love to see him get back to.”

Young is one of the few bona fide stars on Washington’s roster, which has been riddled with injuries all season — ever since losing starting quarterback Ryan Fitzpatrick in Week 1. He’s been joined by players such as wideout Curtis Samuel, tight end Logan Thomas and center Chase Rouiller.

The team’s other starting defensive end, Montez Sweat, is on injured reserve with a broken jaw.

Rivera acknowledged this week that Sweat’s absence would put more of a burden on Young.

Which is why, the coach said, he told his player heading into the Bucs game: “Now’s when you really got to play your game. Now you’ve really got to stick to being disciplined.”