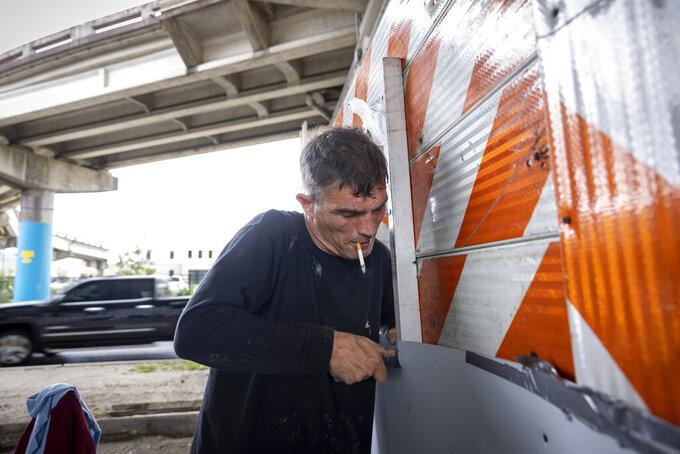 CHRIS GRANGER, ASSOCIATED PRESS
Joe Warpup screws a recycled political candidate sign into the wall of his shelter underneath the Claiborne Avenue overpass in New Orleans on Wednesday, Nov. 17, 2021. As the evening temperatures dipped into the 50s, Warpup set out to build a sturdier, more weather-resistant shelter. (Chris Granger /The Advocate via AP) 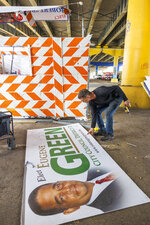 NEW ORLEANS (AP) — For most of us, the November nip in the air means nothing more than changing into long sleeves. But for homeless people, the approach of winter brings the threat of difficult-to-escape discomfort, and worse. Tents provide some warmth and relief from the wind, but with scant insulation, they can only do so much.

“By the time it’s mid-January, it will be intolerably cold,” said Joe Warpup, a homeless man who lives in a small encampment under the Claiborne Avenue overpass.

So, last week, as the evening temperatures dipped into the 50s, Warpup set out to build a sturdier, more weather-resistant shelter. In a dumpster on Rampart Street, he discovered a stash of discarded plastic planks that had once been used as traffic barricades. Warpup used those to build the walls of a small cabin.

Warpup predicts that the hollow orange and white boards will provide much better insulation than a tent. Plus, he said, the plastic cabin can’t be slashed by a knife, as happens to tents sometimes in the long cold nights under the highway.

Warpup, 44, knows about the cold. He comes from Detroit where, he said, when he was in ninth grade authorities canceled school for three days, because it was just too cold to go outside.

Warpup has lived on the street on and off for more than three years. He came to New Orleans in August 2020. He says he speaks a little French and was seeking out the most French place in the country. He heads up a small organization called Homeless for Homeless. He said there are nine members of his group, who camp together near Lafitte Street and share meals.

In the aftermath of Hurricane Ida, the Bonnaroo Music Festival in Tennessee donated a load of silver-gray tents — once occupied by rock and roll fans — to homeless and needy people in Louisiana who’d lost their shelters. Warpup helped distribute the tents in New Orleans.

He borrowed the tools to build the new cabin. A chain saw got stolen in the process, he said.

Warpup said he picked up carpentry skills back when he helped his stepdad renovate a 19th century house and build another from scratch. Stepdad was a perfectionist, Warpup said, and he couldn’t have tolerated the rough construction of the 8-by-13-foot cabin.

“I’m not a professional builder, I just play one on TV,” Warpup said, laughing as he installed a plastic plank with an electric screwdriver.

“There’s been a learning curve and this looks like s—t,” he said of the structure. But, he added, the wind probably couldn’t get through the walls.

The intersection of the orange and white stripes on the walls of the cabin is dazzling. The two windows are rimmed with silver duct tape, the roof is made of a tent frame that Warpup plans to cover with discarded campaign signs from the recent election.

Warpup said he realizes that the hazard barriers and campaign signs lend the cabin a certain symbolic resonance. It seems to be a commentary on the city’s infrastructure woes and political vicissitudes. But, he said, those associations were unintentional.

“Homelessness is fundamentally an economic situation, not a political one,” he said. “The fact that these signs are political doesn’t matter. They were free and available.”

The striking orange and white cabin “illustrates that we don’t have any place to go,” he said.

It also implies that “your waste is enough to sustain us,” he said.

Warpup said that when the orange and white cabin is all finished, it will be a place where he and his small group can hang out, play cards, and find some reprieve from the constant drone of the highway overhead. He plans to install lighting in the ceiling and speakers for music. He hopes someday to add an external propane burner that will provide hot water to pipes that circulate through the cabin for heating.

Warpup said he won’t be surprised if someday he and his group will have to leave their current location and move along. He predicts that people in the nearby neighborhood may eventually complain to the city about their encampment. That’s why he designed the cabin to be disassembled and transported to a new location.

Warpup said he’s held a string of jobs through his life, but he’s not cut out for workday routines. Years ago, he said, he attended the University of Michigan in Flint, where he studied poverty issues. He said he’s volunteered at shelters and churches that aided homeless people. But it wasn’t until he became homeless himself that he was really able to offer a helping hand.

“Homeless people listen to me in a way they don’t listen to any institution,” he explained.

Still, he said, he’s had enough of life on the street and hopes to find a permanent residence soon. Maybe Christmas. Maybe even Thanksgiving.