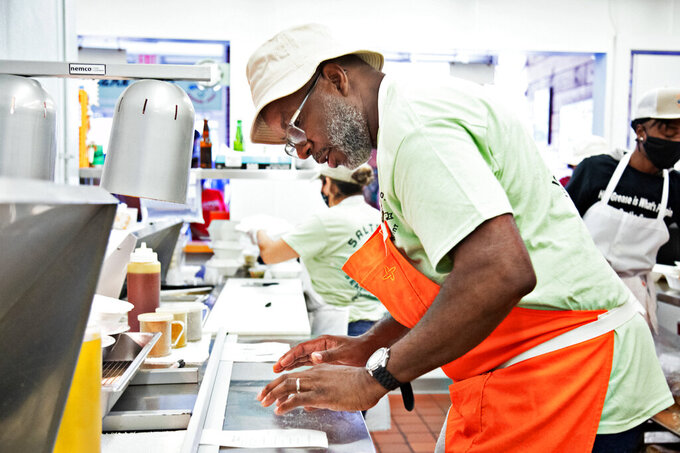 RALEIGH, N. C. (AP) — Starting with a small fried fish shack in Durham, chef Ricky Moore is on top of the culinary world.

Known as the Oscars of the food world, the James Beard Foundation’s chef and restaurant awards have been on hiatus since the beginning of the pandemic in 2020. This month, the awards gala returned to Chicago.

“It’s a beautiful thing to be recognized for what I’m doing currently,” Moore said in his acceptance speech. “I got burned out being an executive chef here and executive chef there. So my restaurant was sort of like my apprenticeship to entrepreneurship. And I put my heart and soul in it.”

Moore shouted out Durham from the stage, throwing up Bull City horns with a fresh James Beard Award medal gleaming from his chest.

Moore went to the country’s finest culinary school and cooked in Michelin-starred restaurants, but his Saltbox Seafood Joint was born in a small shack in downtown Durham. The restaurant opened in 2012 as a 205-square-foot shack on North Mangum Street, serving whatever was fresh from the North Carolina coast. It expanded in 2017 with a larger location on Durham-Chapel Hill Boulevard in Durham’s Rockwood neighborhood.

Moore shines a light on North Carolina seafood beyond the shrimp, oysters and flounder, serving drum and mackerel and bluefish, fried and seasoned, topped with slaw and piled on rolls or plates. The sides include “Hush Honeys,” Moore’s honeydrizzled take on hush puppies and a bright slaw.

“I took that small place that a lot of people found insignificant, and made it a celebration of seafood culture,” said Moore, a New Bern native.

North Carolina chefs dominated the nominations for Best Chef: Southeast, with four of the five hailing from the Tar Heel state. In the Triangle, Moore was joined by Cheetie Kumar of Garland. Charlotte’s Greg Collier of Leah & Louise and Button of Curate also were nominated.

“There’s a burst of culinary talent here,” Moore said before the awards. “People who are really into it, on fire about it. There are people who really want to be true cooks and talk about the cuisine in our region. And because of that we’re in the conversation today with other destinations in the country. Charleston, New York, San Francisco, Chicago.”

This is the fifth year in a row that Kumar has at least been a James Beard semifinalist. In 2020, Kumar was a finalist in the Best Chef: Southeast category, but those awards were canceled and the awards were altered in 2021 as the James Beard Foundation retooled its criteria for its honors in an effort to improve equity among winners, the group said.

“I can’t help but feel like North Carolina has always felt like a geographically great place to cook in,” Kumar said before the awards. “The politics, the diversity, really lends our culture to excellent food and foodways. It feels a little jarring. I always though this evolution would be more gradual. But that’s what happens when we stop and reevaluate everything.”

Asheville’s Cleophus Hethington of Benne on Eagle is up for Emerging Chef in the county.

Alley Twenty Six brought the craft cocktail revival to Durham, opening in 2012 and helping to kick off a vibrant downtown drink scene.

The bar ascended into a small circle of nationally renowned cocktail bars with its nomination, but missed out on the James Beard top bar award, which went to Julep out of Houston.

“It’s been wonderful, it’s humbling, in some ways it’s confounding,” Healy said ahead of the awards. “It’s been really great to be able to be the folks holding the banner for North Carolina.”

Healy, who also owns Chapel Hill’s Crook’s Corner, said the nomination brings excitement and perhaps some grander expectations, but that Alley Twenty Six is prepared to meet them.

“I think we’ve already won,” Healy said of the nomination before the awards. “It gives us an opportunity to prove (patrons) right when they visit us. It’s not a golden ticket, it’s a golden opportunity.”

Durham has a healthy collection of cocktail bars these days, but a decade ago Alley Twenty Six stood alone.

“People would come in an say, ‘This is like a New York bar,’ or ‘Like an LA bar,’ like an alien had landed on downtown Durham,” Healy said. “I would say, ‘It’s more like a good Durham bar.’ It’s my idea of what a good bar is, that’s aware of its place in time.”