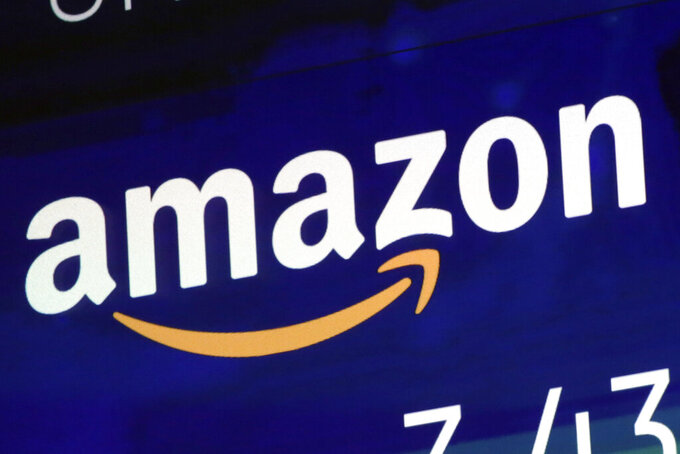 Richard Drew, ASSOCIATED PRESS
FILE - In this Friday, July 27, 2018 file photo, the logo for Amazon is displayed on a screen at the Nasdaq MarketSite. Amazon says it will stop accepting Visa credit cards issued in the United Kingdom because of a dispute over fees that the payment company charges. The e-commerce giant said in a message to customers Wednesday, Nov. 17, 2021, that they won't be able to use Visa credit cards after January 19, 2022, blaming "the high fees Visa charges for processing credit card transactions.” (AP Photo/Richard Drew, file)

LONDON (AP) — Customers are caught in the middle of a growing dispute between Amazon and Visa over transaction fees.

The online retail giant moved this week to stop shoppers from using Visa credit cards issued in the United Kingdom starting next year, the latest salvo in a battle between payment networks and retailers. Amazon blamed “high fees” for its decision, marking an escalation from action it has taken in Singapore and Australia, where it has started charging 0.5% extra for using credit cards from the payment juggernaut.

Seattle-based Amazon and San Francisco-based Visa are two of the biggest forces in retail, and their showdown over fees marks an inflection point in the payment industry, said Laura Hoy, equity analyst at Hargreaves Lansdown.

“Historically, Visa’s been able to charge whatever it sees fit because of its huge network of card users — not accepting Visa meant cutting out a huge pool of potential customers,” Hoy said. “More merchants accepting Visa meant more customer sign-ups, and the virtuous loop spun onward.”

Amazon hopes to break this chain by cutting the card company out of its payment options in the U.K., and it is probably one of the only players with enough power to do so, Hoy said.

Visa is the dominant payment network in Europe, with 58% of the market, while MasterCard has 41% and American Express 1%, according to the Nilson Report, an industry publication. Visa has a similar footprint in the U.S., where it has about half the market while its two rivals together account for about a third.

In the U.S., Amazon could drop Visa as the provider of its Prime credit card. It’s in talks with MasterCard and American Express as part of a standard review of its co-branded credit card agreement, a spokesperson said.

Merchants have been grumbling for years about card fees, which include various payments to banks on either side of the transaction and the card network itself.

In the U.K., the British Retail Consortium industry group has warned that “abusive fee hikes" add to costs that consumers pay for goods and services. The country's Supreme Court even ruled in 2020 that interchange fees, which are collected by a shopper's bank, are unlawful.

The ruling came shortly before the United Kingdom left the European Union, which resulted in rising interchange fees in the U.K. because card companies were no longer required to comply with the bloc's caps on those charges.

Major card brands have hiked those fees on some transactions between the EU and the U.K. to 1.5% from 0.3% before Brexit, according to the British Retail Consortium.

Meanwhile, other fees paid to the card networks themselves have also gone up in the U.K., doubling between 2014 and 2018, the group said.

“With retailers now spending over 1 billion pounds ($1.3 billion) to accept card payments, it is no surprise many retailers are frustrated by these surging fees," said Andrew Cregan, the group's payments policy adviser.

It urged regulators to tackle what it called “anti-competitive card charges."

“Ultimately, it will be consumers who suffer higher prices unless these spiraling costs can be brought to heel," Cregan said.