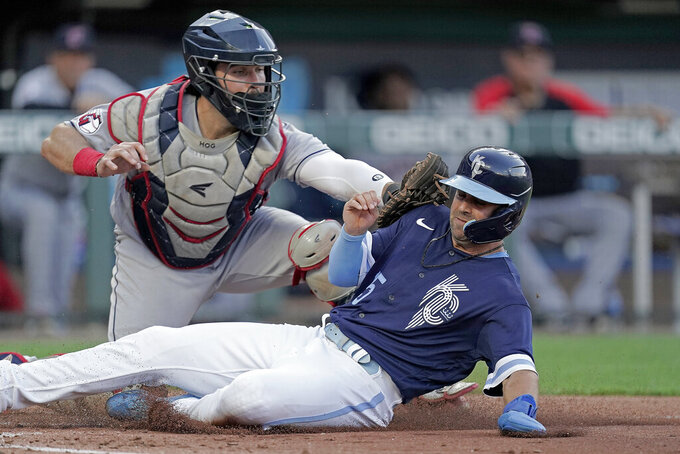 Charlie Riedel, ASSOCIATED PRESS
Kansas City Royals' Whit Merrifield is tagged out at home by Cleveland Guardians catcher Austin Hedges as he tried to score on a single by Andrew Benintendi during the third inning of a baseball game Friday, July 8, 2022, in Kansas City, Mo. (AP Photo/Charlie Riedel)

Vinnie Pasquantino opened the Kansas City ninth with a double to right against Sam Hentges (2-1) that nearly cleared the fence. Edward Olivares then entered the game as a pinch-runner.

“I'm really happy that I kept hitting even though a lefty was pitching,” Pasquantino said. “At the end of the day, I'm glad we set the stage for Michael to send us home.”

After Kyle Isbel struck out on a foul bunt, Taylor poked a 1-2 pitch into right for the winning hit.

“Two strikes I was just trying to protect and make contact and was thinking the other way,” Taylor said. “It's a lot of fun especially with all the energy in this ballpark and the fans.”

Cleveland led 3-1 after seven innings, but Whit Merrifield hit a tying two-run homer in the eighth against Eli Morgan. It was just his second homer in 42 games.

“That was one of my better ones,” Merrifield said. “It even kind of left me on balance so I could kind of admire it."

The Guardians have lost five straight and seven of eight overall.

Scott Barlow (3-2) pitched a shaky ninth for the win. Cleveland loaded the bases with one out, but Myles Straw bounced into a forceout at home and Steven Kwan flied to right.

“We knew it had to be hit real hard to have a chance,” Royals manager Mike Matheny said about the forceout. “We like Scott's chances and Isbel made a nice play in right field to put that away.”

Franmil Reyes hit a tiebreaking two-run homer for the Guardians in the seventh. Aaron Civale pitched seven effective innings in his longest outing since June 11, 2021.

Cleveland prospect Nolan Jones hit an RBI double in his first major league at-bat in the second. He also singled in the seventh.

“He swung the bat really well,” Francona said. “I'm sure his heart was beating a beat or two, but I thought we swung the ball well.”

Reyes hit his eighth homer on a 3-0 pitch from Singer. He also went deep during Wednesday's 8-2 loss at Detroit.

Civale allowed six hits, struck out six and walked none.

“I think I just needed to focus on me,” Civale said. “My skillset is reading hitters and reading the game. I am trying to get a little bit away from the scouting report and focus on that.”

Andrew Benintendi hit an RBI single for Kansas City in the third. Singer allowed six hits, struck out five and walked none in seven innings.

The Guardians also recalled Jones from Triple-A and optioned OF Richie Palacios.