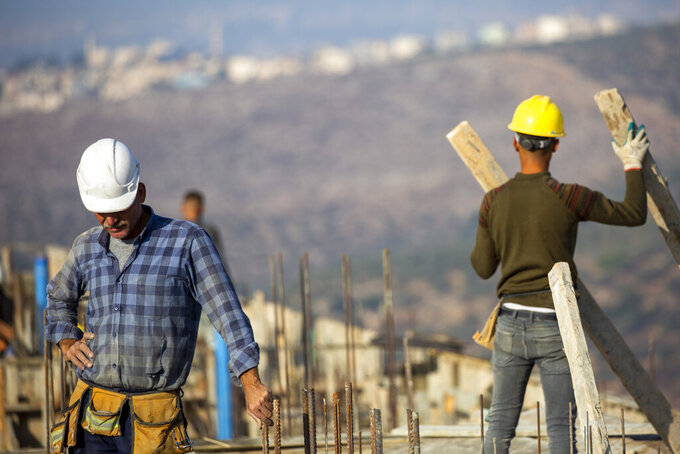 Ariel Schalit, ASSOCIATED PRESS
FILE - Palestinian laborers work building new houses in the West Bank Jewish settlement of Bruchin near the Palestinian town of Nablus, Monday, Oct. 25, 2021. After years in Israel’s political wilderness, small dovish parties that support Palestinian statehood and oppose Jewish settlements are back in government. But they are finding their influence is limited, with pro-settler coalition partners showing little appetite for compromise and the country's decades-long occupation churning on. (AP Photo/Ariel Schalit, File)

TEL AVIV, Israel (AP) — After years in Israel’s political wilderness, small dovish parties that support Palestinian statehood are back in government. But they are finding their influence is limited, with coalition partners who support Jewish West Bank settlement showing little appetite for compromise and the country's decades-long occupation churning on.

The parties are having to rein themselves in as hopes for a Palestinian state slip further away under their watch, with settlement construction booming and peace talks a distant memory. Nonetheless, the left-leaning lawmakers say their presence in the coalition is important and that the alternative is worse.

“Unfortunately, this is not the government that will sign a peace agreement with the Palestinians,” said Mossi Raz, a lawmaker from the dovish Meretz party, which is part of the coalition. “We are not a fig leaf. We are making our voices heard. But our power is meager.”

Israel's coalition government, formed in June after a lengthy political crisis, is a fractious collage of parties from across the political spectrum bound by the goal of keeping former Prime Minister Benjamin Netanyahu out of power. The parties agreed to put aside contentious issues like the country’s 50-plus-year occupation of territories Palestinians want for their state, choosing instead to focus on less divisive issues, like the pandemic, the economy and the environment.

Yet the occupation grinds on. Under the current government, Israel has moved ahead on building thousands of homes for settlers in the West Bank. Its defense minister has outlawed six Palestinian rights groups, alleging links to a militant faction. Radical settlers have stepped up violent attacks on Palestinians in the occupied West Bank, as Israeli soldiers stand by or assist the settlers. Prime Minister Naftali Bennett, who once headed the country’s main settler lobbying group, rejects the idea of a Palestinian state, and Palestinians remain deeply pessimistic about the near-term future.

Israel's two center-left parties, Labor and Meretz, spent years in the opposition. It's been a decade for Labor and more than twice that long for Meretz.

Labor had made resolving the conflict with the Palestinians a core issue when it was in power in the 1990s - even as settlement construction continued, as it has under all Israeli governments for the past 54 years.

In the mid-1990s, a Labor-led government that also included Meretz signed interim peace agreements with the Palestinians known as the Oslo Accords.

But moving ahead with the agreements stalled when a right-wing government took over in 1996 after a wave of attacks by Palestinian militants, followed by failed peace talks under another short-lived Labor government in 2000 and the outbreak of a Palestinian uprising later that year.

The Israeli electorate shifted to the right, and the political base of Labor and Meretz shrank. Labor, home to Israel's founding leaders and the country's ruling party for the first two decades, won just a handful of seats in Israel's 120-member parliament in recent elections. Meretz dropped from a high of 12 seats in the 1990s to six seats.

Some Labor and Meretz voters bolted to the centrist Yesh Atid, which focuses on economic issues and is the second-largest party in parliament.

Following elections in March, Meretz and Labor agreed to put aside ideological differences to form a coalition led by Yesh Atid, with centrist and right-wing parties, along with one Islamist party, opposed to Netanyahu’s rule.

But in the negotiations to forge the coalition, nationalist parties blocked the dovish factions from positions that help set policy on the Palestinians. The nationalist parties also have veteran lawmakers who know whose back to scratch to push their priorities, a skill left-leaning parties were missing after years in opposition, said Gayil Talshir, a political analyst at Jerusalem’s Hebrew University.

Still, the left has leverage to push for some of its priorities, she said. The coalition commands a razor-thin majority in parliament and needs the support of Labor and Meretz, which have a total of 13 seats in parliament. “No one really wants to go to elections,” Talshir said.

For now, much of the left's impact has been with its rhetoric, and even that has been watered down for fear of rocking the boat. The response was muted after the government outlawed the six Palestinian NGOs, including groups that monitor Israeli human rights violations in the occupied territories.

Meretz leader Nitzan Horowitz, who serves as health minister, demanded clarifications and said it was concerning, but stopped short of condemning it.

Public Security Minister Omer Barlev of Labor said that the decision was made over his head despite his membership in the country's Security Cabinet.

Labor and Meretz have also been unable to slow settlement expansion.

Israel’s environment minister, Meretz politician Tamar Zandberg, acknowledged the party cannot achieve everything it wants but said it remained committed to the coalition deal it had signed.

“Within those limitations, we will do everything in our power to promote as much of our agenda as possible,” she recently told The Associated Press.

In the months since the coalition was formed, there have been small steps toward repairing the relationship with the Palestinian self-rule government, headed by Mahmoud Abbas, after years of rupture under Netanyahu. Several Israeli government ministers have met with Abbas, and Israel granted more work permits for Palestinian laborers.

Lior Amihai of the Yesh Din rights group, which documents settler violence against Palestinians, said he has noticed a change in style, though not substance. He said a parliamentary hearing on settler violence was recently held, for instance, something he wouldn't have expected in other Knesset sessions.

“I can't point to results in the field in terms of the occupation but there is a different feeling. You can work with the Knesset,” said Amihai.

Ahmad Majdalani, a top Palestinian official, said the change is only cosmetic and Israel has a long way to go.

“We believe that this government has not changed its policy towards the Palestinian issue,” he said.