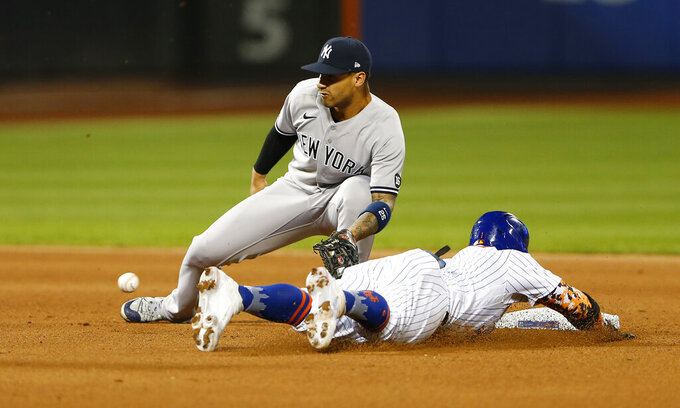 NEW YORK (AP) — Gleyber Torres was treated by the Yankees the same way he dealt with too many grounders: He was given the boot from shortstop.

New York moved the error-prone infielder to second base for Monday’s game against Minnesota.

Andrew Velazquez, a shortstop optioned Sunday to Triple-A Scranton/Wilkes-Barre, could be recalled when eligible.

Torres, 24, was primarily a second baseman during his first two seasons with the Yankees in 2018 and 2019. He filled in at shortstop when Didi Gregorius got hurt and was moved there for 2020 after Gregorius left as a free agent to sign with the Philadelphia Phillies.

Torres made nine errors last year and has 18 this season, the second most in the American League behind the 24 of Toronto's Bo Bichette.

“This past week he struggled a little bit out there defensively,” Boone said. “I feel like it’s been a weight on him this week and I just feel like this is something that hopefully can take a little weight off him.”

Torres misplayed what should have been an inning-ending double-play grounder by James McCann in the seventh inning Friday night, allowing two runs in the Yankees’ 10-3 loss at the Mets. Torres let Kevin Pillar’s leadoff grounder in the second inning bounce off an arm on Sunday night, leading to Francisco Lindor’s two-out, three-run homer. Lindor homered three times during the Mets’ 7-6 win.

“I think there’s been a weight and a pressure to it over this last week that I’ve certainly sensed," Boone said. "I think he’s such a dynamic player for us when he’s going well that I feel like the switch over there might be something that really gets him rolling."

Torres has slumped for the second straight season. He entered Monday hitting .252 with seven homers and 45 RBIs after batting .243 with three homers and 16 RBIs during the pandemic-shortened 2020 season. He hit .278 with 38 homers and 90 RBIs in 2019, making the AL All-Star team for the second consecutive season.

“I think it sometimes becomes such a story — one play becomes such a storyline, a narrative that lasts a long time, which I think at times has been really unfair because I think there's been large chunks of really steady play out there for us this year,” Boone said. “My sense is that I feel like this last week has weighed on him and he’s made a couple of mistakes. And then all of a sudden you’re out there playing a little bit tentative and not to make a mistake. And that’s what I don’t want to see. And obviously we’re at a critical point of the year where we’re getting down to the end and I feel like I don’t really want that to snowball a little bit.”