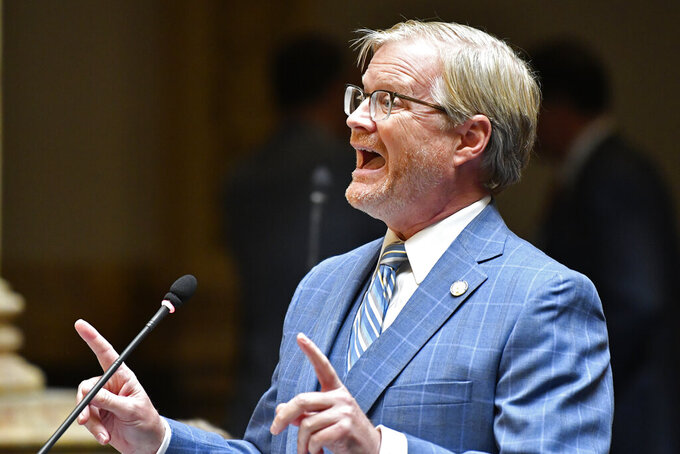 FRANKFORT, Ky. (AP) — Republican lawmakers took initial steps Tuesday to block statewide mask mandates, showing their preference for local decision-making on the issue as they reconvened for a special session to assert their dominance in shaping Kentucky's response to the COVID-19 pandemic.

In a daylong burst of action, a Senate committee advanced a measure to nullify the state school board's requirement that anyone in a public K-12 school wear a mask. The bill would leave it up to local school boards to decide mask policies for their districts.

A House panel advanced another bill to prevent the governor from issuing any new statewide orders requiring mask wearing. Democratic Gov. Andy Beshear previously used a mask mandate to combat the virus's spread. He lifted it but has said he would have reinstituted a mask-wearing requirement to counter a recent COVID-19 surge if he still had the authority.

The session marks a dramatic power shift in coronavirus-related policymaking in the Bluegrass State. Since the pandemic hit Kentucky, Beshear mostly acted unilaterally in setting statewide virus policies, but the state Supreme Court shifted those decisions to the legislature in a landmark ruling.

On the session's opening day, lawmakers gave swift final approval to a measure extending the pandemic-related state of emergency until Jan. 15 — a move Beshear requested. The measure won overwhelming approval in the GOP-dominated House and Senate.

Dozens of anti-mask advocates gathered at the statehouse as many lawmakers chose not to wear masks as they assembled for the session.

Beshear called the legislature back to the Capitol to consider a range of virus-related issues. GOP lawmakers responded by unveiling several bills Tuesday that will guide Kentucky's pandemic policies. It comes as Kentucky's death toll from COVID-19 surpassed 7,900, and as the state's hospitals treat rising numbers of coronavirus patients because of the fast-spreading delta variant.

The bill would allow local school leaders to tailor responses to the pandemic that best fit their districts, said Republican Sen. Max Wise, the committee chairman.

That includes the use of distance learning when outbreaks occur.

The measure would allow local school leaders to limit remote instruction to a particular school, grade or classroom, depending on the extent of the outbreak. Wise called it a “surgically focused protocol” aimed at keeping children in school when they have no contact with infected children.

“If a fifth-grade class is having a high number of positives, then instead of shutting down the entire school district, the fifth grade can look to move to remote learning,” Wise said.

The measure also would nullify a mask mandate for Kentucky's child care facilities.

Democratic Sen. Reggie Thomas countered that mask wearing works in fighting the spread of a virus that “knows no borders.”

“To not have protections that apply to all Kentuckians when this virus can spread anywhere and everywhere ... is just irresponsible,” he said.

The bill that cleared the House Health and Family Services Committee would make a statewide mask mandate “null and void,” said Republican Rep. Kimberly Poore Moser, the committee chairwoman. Masking decisions should shift to local governments and businesses, she said.

The proposed ban on statewide mask orders was tucked into a bill dealing with COVID-19 testing, treatment, vaccines and other issues. Beshear has asked legislators to give him authority to, at a minimum, require masking when COVID-19 infection rates reach high levels.

Meanwhile, the measure extending the pandemic-related state of emergency was put on a fast track as it cleared both chambers in one day, sending it to the governor.

While disagreements exist over rules on mask wearing, there's widespread agreement to continue a number of actions taken by Beshear and his administration to combat COVID-19, Republican House Speaker David Osborne said. For example, Osborne pointed to orders to prevent price gouging and give licensing flexibility for out-of-state health care providers to work in Kentucky. Those actions and others were set to lapse unless extended by lawmakers.

"They were things that truly did impact and improve the opportunity for Kentuckians to navigate the pandemic,” Osborne said.

Throughout the public health crisis, the governor waged an aggressive response against the virus. Beshear says his actions saved lives. Republicans criticized the governor for what they viewed as overly broad and stringent restrictions, most of which were lifted in June.

Special sessions have no time limit but usually last less than a week and cost taxpayers about $68,000 a day.