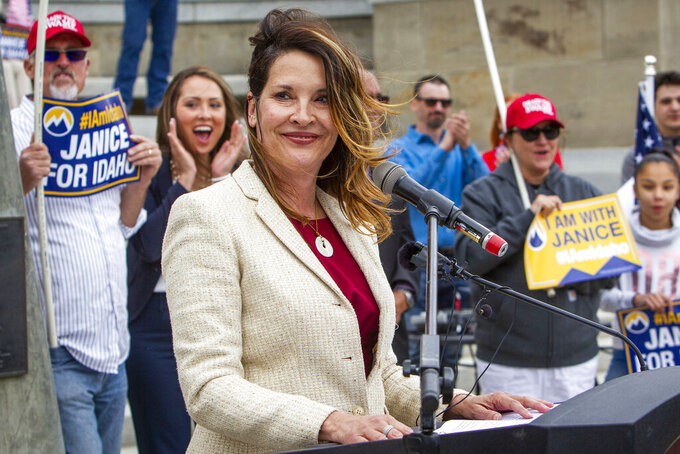 McGeachin, who is running for governor, held a news conference at the Statehouse to repeat her request to reconvene the Legislature to pass the ban. She also faulted the executive branch without naming Little.

“This idea of discriminating against and firing employees based on private and personal health decisions flies in the face of the principles of liberty and justice,” McGeachin said.

“Today, I call on Idaho’s hospitals and health care companies to drop their vaccine mandate so that we may have a chance to sit down together, discuss these issues associated with the mandate and the infringement on personal health care decisions in greater detail,” McGeachin said.

She is on the far right of the state Republican Party, but as lieutenant governor, has little power to act. She presides over the Senate when it's in session and can cast a vote to break a tie.

McGeachin opposed many of Little's pandemic restrictions, which were designed to prevent health care facilities from being overrun with patients. She also has been vocal in her opposition to mask mandates, which Little has never issued statewide.

In April, he issued an executive order banning the state from requiring or issuing “vaccine passports” for travel or to get into venues. He also is preventing state agencies from providing information on someone’s vaccine status to other people, companies or government entities.

Last week, McGeachin made her initial call for lawmakers to reconvene to take up vaccine mandate measures that failed earlier this year or create new legislation.

She says now that some employers have taken action to require vaccines, lawmakers are more likely to pass legislation. Two Republican state senators and four representatives said this week that they would support legislation involving vaccine mandates, but not all of them favored reconvening the Legislature.

Republican Senate Pro Tempore Chuck Winder and Republican House Speaker Scott Bedke, who would be considered very conservative in most states but come under attack from the far right in Idaho, have been noncommittal about reconvening the Legislature amid concerns that the government should generally not interfere with the work requirements of private businesses.

Typically, only governors can call special sessions. But the House never fully adjourned this year under a plan to allow Bedke to simply call lawmakers back to the Statehouse without needing Little’s OK.

McGeachin was backed at the news conference by about 20 people, some identified as health care workers. Several of them spoke in favor of lawmakers or Little intervening in the matter.

About 75 supporters also filled the room, sometimes jeering reporters as they asked questions, even interrupting McGeachin when she tried to respond.

They cheered when McGeachin said she would be acting governor later Thursday, meaning she could issue an executive order potentially stopping mandatory vaccines by employers.

But Little's spokeswoman, Marissa Morrison, said he was only out of the state for about 15 minutes in the morning after landing in eastern Washington on his way to northern Idaho. She said he planned to fly out of Coeur d'Alene when he returned to Boise and would not be out of the state again on the trip.

As acting governor in May, McGeachin issued an executive order banning mask mandates, which Little nullified the next day when he returned to the state, calling McGeachin's action a "self-serving political stunt.”

After the news conference Thursday, McGeachin held a rally on the Statehouse steps that drew about 500 people.