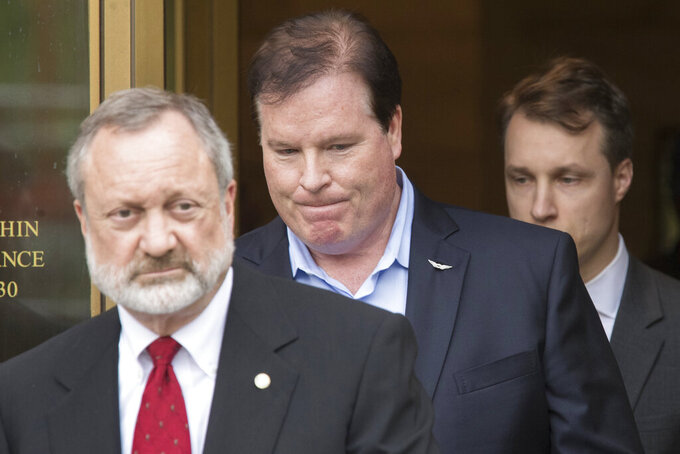 Mary Altaffer, ASSOCIATED PRESS
FILE - In this May 23, 2019, file photo, Chicago banker Stephen Calk, center, leaves Federal court , in New York with his attorney Jeremy Margolis, left. A Manhattan jury on Tuesday, July 13, 2021, convicted Calk of criminal charges for enabling Paul Manafort to get $16 million in loans before the former campaign manager for ex-President Donald Trump helped him get an interview for a job in the Trump administration. (AP Photo/Mary Altaffer, File)

NEW YORK (AP) — A Manhattan jury on Tuesday convicted a Chicago banker of criminal charges for enabling Paul Manafort to get $16 million in loans before the former campaign manager for ex-President Donald Trump helped him get an interview for a job in the Trump administration.

The jury returned its verdict in federal court after less than two hours of deliberations, convicting Stephen Calk of financial institution bribery and conspiracy. Calk’s lawyers had maintained their client did nothing illegal in the weeks after Trump won the presidential election in November 2016.

But prosecutors said Calk cleared a path for Manafort to receive loans he was not entitled to in the hopes that Calk could secure a high-level post with the Trump administration. Although Calk eventually got an interview at Trump Tower, he was not hired.

Sentencing was set for Jan. 10 for Calk, who was the former chief executive of The Federal Savings Bank.

As Calk left the courthouse, he declined comment. His lawyer, Paul Schoeman, later issued a statement, saying: “We are very disappointed by the verdict and will be pursuing all available legal remedies, including an appeal.”

In a release, U.S. Attorney Audrey Strauss said Calk had used his federally insured bank to try to buy himself “prestige and power.”

During the three-week trial, prosecutors gave jurors proof that Calk played a pivotal role in getting approval for a $9.5 million real estate construction loan and another $6.5 million so Manafort could finish construction on a Brooklyn condominium and avoid foreclosure.

Defense lawyers argued that Calk could not win approval for the loans without the bank's loan committee and underwriters agreeing to the terms. And they noted that the loans were obtained at a time when Manafort was considered wealthy and successful and had not yet been criminally charged.

Early in the trial, Anthony Scaramucci testified that he never would have enabled Calk to get the interview for the administration post if he had know that Calk was helping Manafort to get millions of dollars in loans for his real estate ventures.

Scaramucci had testified that Manafort, who served as Trump’s campaign manager for a key stretch from June to early August 2016, reached out to him in mid-to-late December 2016 to encourage him to consider Calk for an important position.

At the time, Scaramucci was working on Trump's presidential transition team.

Although Calk had hoped to become Secretary of the Army, he eventually interviewed for other positions because that post had already been filled, Scaramucci said.

Manafort lost his position in Trump’s campaign over his ties to Ukraine. Special counsel Robert Mueller’s Russia investigation led to his criminal conviction and a sentence of over seven years in prison for financial crimes related to his political consulting work in Ukraine. In December, Trump pardoned him.