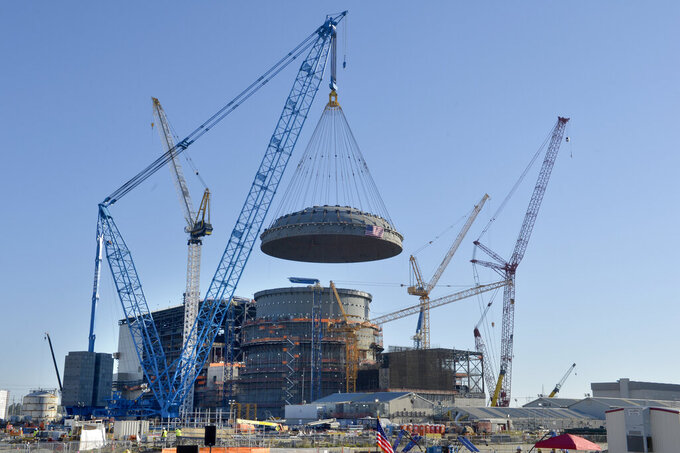 Michael Holahan, ASSOCIATED PRESS
A large dome is lowered onto a nuclear containment building at the Plant Vogtle nuclear energy facility in Waynesboro, Ga., Friday, March 22, 2019. The cost of two new reactors being built there is now at least $28.5 billion, more than twice the original price tag, with the other owners saying Georgia Power Co. has triggered an agreement requiring Georgia Power to pay more of the costs. (Michael Holahan/The Augusta Chronicle via AP)

ATLANTA (AP) — The cost of two nuclear reactors being built in Georgia is now $28.5 billion, more than twice the original price tag, and the other owners of Plant Vogtle argue Georgia Power Co. has triggered an agreement requiring Georgia Power to shoulder a larger share of the financial burden.

Atlanta-based Southern Co. announced in its quarterly earnings statement Thursday that Georgia Power's share of the third and fourth nuclear reactors at Plant Vogtle has risen to a total of $12.7 billion, an increase of $264 million. Along with what cooperatives and municipal utilities project, the total cost of Vogtle has now more than doubled the original projection of $14 billion.

“We said you can't build it for what you're saying you can,” she said of Georgia Watch's opposition to the project when the Georgia Public Service Commission originally authorized the new reactors.

Total costs are actually higher than $28.5 billion, because that doesn’t count the $3.68 billion that contractor Westinghouse paid back to owners after going bankrupt. When approved in 2012, the first electricity was supposed to be generated in 2016.

The company and regulators insist the first new U.S. reactors in decades are the best source of clean and reliable energy for Georgia. Opponents say other options would be cheaper and better, including natural gas or solar generation.

Southern Co. also disclosed Thursday that the other owners of Vogtle are saying Georgia Power has tripped an agreement to pay a larger share of the ongoing overruns, a cost the company estimates at up to $350 million. Southern Co. said it disagrees that Georgia Power has crossed the cost threshold but has signed an agreement to extend talks with the other owners on the issue.

Georgia Power owns 45.7% of the new reactors, while cooperative-owned Oglethorpe Power Corp. owns 30%. The Municipal Electric Authority of Georgia owns 22.7% and the city of Dalton's municipal utility owns 1.6%. Florida's Jacksonville Electric Authority is obligated to cover some of MEAG's costs. Some cooperatives and municipal utilities in Alabama and northwest Florida have agreed to buy power as well.

The higher costs stem from more construction delays. Georgia Power announced last month that it doesn't expect Unit 3 to start generating electricity until the third quarter of 2022. It was the third delay announced since May. Unit 4 is now projected to enter service sometime between April and June of 2023.

Georgia Power shareholders have been paying the cost of recent overruns, but the company could ask regulators to require customers to pay some or all of those bills.

Other owners almost walked away in 2018, only agreeing to keep going after Georgia Power agreed to protect them from some additional overruns.

The Thursday stock filing indicates the other owners now believe the cost threshold has been reached requiring Georgia Power to pay a larger share of the project.

Southern Co. told investors that Georgia Power disagrees that it has reached the threshold, but said the owners had signed an agreement Oct. 29 to “clarify” how the 2018 deal will work.

The $350 million price tag suggests the other owners argue overruns have reached the third tier.

It wasn't immediately clear Thursday exactly what is being negotiated or when an agreement might be reached. Georgia Power spokesperson Jeffrey Wilson acknowledged the disagreement, saying “all parties are working constructively” to resolve differences. He answered no questions. Oglethorpe spokesperson Terri Statham declined comment, saying Oglethorpe would provide an update in a Nov. 12 investor filing. MEAG didn't respond to emails and calls seeking comment.

The Georgia Public Service Commission on Tuesday approved a $224 million rate increase to pay for $2.1 billion in construction costs on Unit 3. That's a 3% rate increase for residential customers, or $3.78 a month on a bill of $122.73. It will take effect after Unit 3 enters commercial operation.