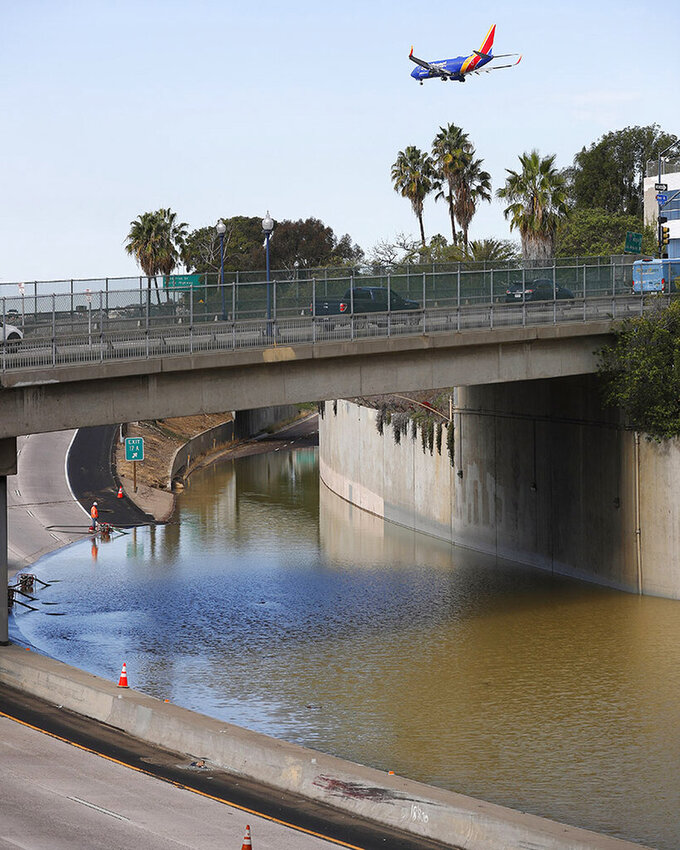 K.C. Alfred, ASSOCIATED PRESS
Workers install pumps on the Northbound Interstate 5 near the Hawthorne Street exit seen flooded due to a water main break on Monday, Nov. 22, 2021. The break, which happened Sunday night, was the second in downtown San Diego that night. (K.C. Alfred/The San Diego Union-Tribune via AP)

SAN DIEGO (AP) — Northbound lanes of Interstate 5 in San Diego were closed for hours Monday after a water main break flooded the key highway that runs through downtown, authorities said.

The pipeline burst Sunday evening and city crews shut down pipes feeding the area around 1 a.m. Monday, the California Highway Patrol said. The highway, on- and off-ramps and surrounding streets remained flooded at midday.

“At this point, it is simply that the drains are overloaded," said highway patrol Officer Officer Mark Latulippe.

Three northbound lanes finally reopened as of 8 p.m. and the ramp from southbound State Route 163 to north I-5 was expected to reopen by Tuesday morning, authorities said.

However, an exit to San Diego International Airport remained closed.

The pipe near the freeway burst at around 7 p.m. Sunday and sent rocks and debris raining on northbound lanes.

An Uber driver told the CHP that water smashed his windshield and injured his passenger while other cars were struck by debris, according to a CHP log cited by the San Diego Union-Tribune.

There was no information about the condition of the injured passenger.

It was the second water main break in downtown within several hours on Sunday. Around 3:30 p.m. a pipe burst near the East Village neighborhood, flooding downtown streets, creating a sinkhole and inundating at least one business, the newspaper reported.

Water was shut off about three hours later.

City public utilities spokesperson Arian Collins said the first pipe that burst was a 24-inch (61-centimeter) transmission main made of reinforced concrete and steel. The second was a 16-inch (41-centimeter) cast iron pipe that was some 75 years old.