FILE - This Sept. 11, 2016 file photo shows a wide angle view of Minute Maid Park in downtown Houston. Major League Baseball has expanded its investigation into the Houston Astros after The Athletic website reported the team stole signs during home games in 2017 by using a camera positioned in center field. The report Tuesday, Nov. 12, 2019 quoted pitcher Mike Fiers, who played for the Astros that season, and three other unidentified people with the club. The Astros won the World Series that year — two sources told The Athletic that Houston used the system into the playoffs while another source said it ended before the postseason. (AP Photo/Juan DeLeon, file) 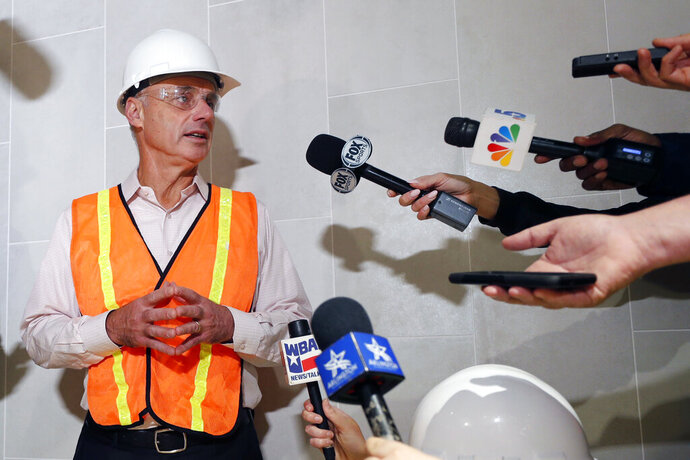 Baseball Commissioner Rob Manfred speaks to the media during a tour of the under construction new Texas Rangers stadium in Arlington, Texas, Tuesday, Nov. 19, 2019. Manfred hopes the investigation into sign stealing by the Houston Astros will be completed by next season and says he has broad authority to impose discipline beyond fines, the loss of amateur draft picks and taking away international signing bonus pool allocation. (AP Photo/LM Otero)