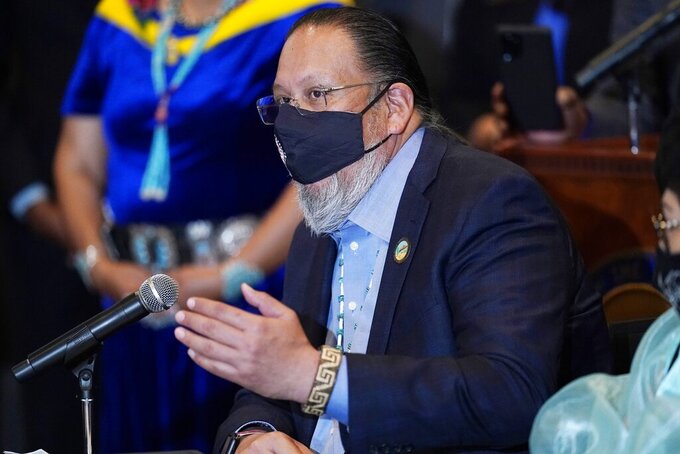 PHOENIX (AP) — Arizona Gov. Doug Ducey signed a bill Thursday that allows a major expansion of gambling, providing a potential revenue windfall for the state and for tribes that will be allowed to boost their gambling offerings.

The measure approved by the Legislature adds additional types of table games at tribal casinos and for the first time allows sports betting under licenses issued to tribes and pro sports teams. It also allows gambling on fantasy sports and new Keno games at horse race tracks and fraternal organizations.

The passage of the legislation is tied to the updated gaming compact Ducey struck with tribes, which was kept secret until compact documents were made public Thursday morning. At the bill signing ceremony, leaders of a host of Arizona tribes joined Ducey in also signing the new compacts.

The updated compact will allow as many as four new casinos in the metro Phoenix area, although only two are likely to be built anytime soon, according to the documents.

They will be on Tohono O'Odham Nation land in the far western reaches of the metro area and on Gila River Indian Community holdings in the southeastern part of the vast metropolis, the documents said. Altogether, as many as 11 new casinos are allowed statewide but only four in the first 10 years.

“There’s no question that Arizona has grown and changed significantly since the last major compact update in 2003,” Ducey said. “It's important that we account for these changes in our policies and our compacts.”

There are currently seven tribal casinos in metro Phoenix and 24 in all across the state. At least one new casino could be built in metro Tucson as well.

Tribes will also be given rights to operate nearly 6,300 new slot machines, on top of the 20,500 already allowed, plus a boost every two years after the new deals are formally approved by the federal government, the documents said.

That provides plenty of growing room for tribal casinos, which are only using about 13,500 machines now, according to the state Department of Gaming. The same is true of card and gaming tables, with 3,600 allowed now, only about 430 in use and more available under the new deal.

The tribal casinos, which had been limited in their offerings, will now essentially be able to offer Las Vegas-style gambling.

Lawmakers involved in pushing the new state law through the Legislature and scores of tribal leaders attended the celebratory signing at the Heard Museum in central Phoenix. Ducey and tribal officials described years of sometimes contentious negotiations to reach an agreement.

“We argued before we agreed. And we fought before we found our middle ground,” said Gov. Stephen Roe Lewis of the Gila River Indian Community. “But here we are today, celebrating the most unique unicorn in political life: A genuine win for us all.”

Notably absent were the wealthy owners of the large pro sports teams, arguably major financial winners in the new state law, and Ducey did not mention them during his remarks.

The plan will allow teams like the Arizona Coyotes, Arizona Diamondbacks and Arizona Cardinals to run sports betting operations at their respective venues, at a retail location within a quarter mile and online, the documents said. There would be 10 licenses awarded to sports, which could include professional golf and even NASCAR.

Some lawmakers in both parties had questioned during debate on the legislation why the lucrative licenses were being exclusively awarded to sports teams, leaving out other bidders and even small businesses that could stand the boost.

Republican Rep. Jeff Weninger of Chandler, who sponsored the bill in the House, has said that the pro sports teams were chosen because of their deep, long-term ties to the state. Outside bidders for the licenses would not have those ties.

Tribes would also get 10 licenses and could run sports books at two dozen tribal casinos in the state, the documents said. There are also options for online gambling, allowing growing online gambling sites like DraftKings to piggyback on the licenses.

DraftKings on Wednesday announced a partnership with the PGA Tour allowing the company to run retail and mobile sports betting in Arizona, including a sports book at TPC Scottsdale, home of the Phoenix Open. The Phoenix Suns and FanDuel announced a similar deal on Thursday.

Private licenses are expected to bring in at least $100 million in new revenue for the general fund, according to Weninger. The Legislature’s analyst s put the figure at $34 million a year, but acknowledged it is speculative.

The state can charge a maximum tax of 8% of the new non-tribal gambling profit, which will go to the general fund. The increase in tribal gaming will bring some increase to a special fund that distributes cash from a 1% to 8% maximum levy on tribal gaming revenues.

The tribes have fiercely protected their exclusive right to most gambling in the state under the gaming compact approved by the state’s voters in 2002 and will continue to get that protection under the new deal, with only the added exceptions allowed.

And in a big win, they would also be allowed to greatly expand their exclusive gambling offerings, adding games like Baccarat and craps to existing offerings of slot machines, blackjack and poker.

In the fiscal year that ended on June 30, 2020, tribes brought in nearly $2 billion in gambling revenue and the state received $102 million, according to a Department of Gaming report, while cities received $13 million.