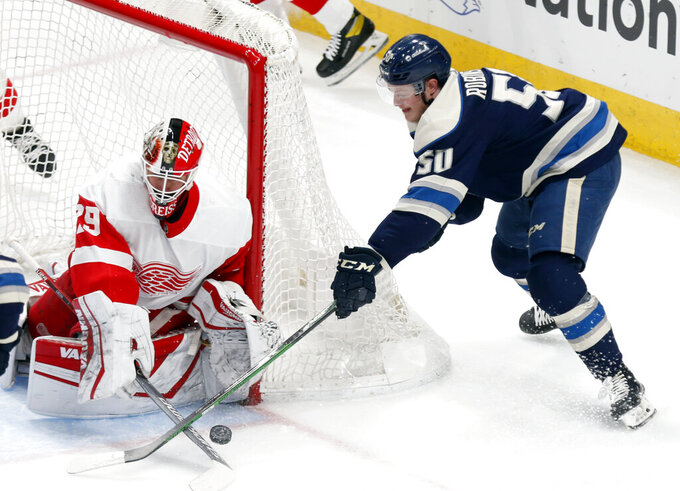 Jakub Vrana had a goal and an assist, and Joe Veleno and Danny DeKeyser also scored in the second period for the Red Wings, who are dueling with the Blue Jackets to stay out of the Central Division basement as they play out the final weekend. Detroit leads Columbus by one point in the standings ahead of Saturday’s finale.

“This is a group that’s fought and competed on a daily basis and it showed tonight,” Detroit coach Jeff Blashill said. “I like this group. There’s a lot of character in this room.”

Gavin Bayreuther and Nathan Gerbe scored for the Blue Jackets, who have lost 12 of their last 14. Matiss Kivlenieks, seeing his first NHL action this season, had 31 saves.

Greiss, who was the NHL First Star of the Week after back-to-back shutouts last week in regulation, is 6-0-3 since April 4.

Bayreuther got his first goal as a Blue Jacket 1:43 into the game, unloading a shot from the point that sailed over the glove of a screened Greiss. In the second, Gerbe got in back of Detroit defenders and beat Greiss for his his first goal of the season.

But the lead wouldn't hold up.

Veleno got his first NHL goal late in the second, snapping in a shot from the right circle on a power play. DeKeyser tied it 58 seconds later, grabbing a rebound off the back wall and beating Kivlenieks from a sharp angle.

“We stayed with it — that’s the biggest thing,” Blashill said. “I don’t think we were good enough in the first period. Our D-zone coverage wasn’t very good. We got better as the game went along.”

Vrana victimized the young Blue Jackets goalie two minutes later with his team-leading 18th goal at 16:52 to give Detroit a 3-2 lead. Vladislav Namestnikov added two empty-net goals late in the game to cap the scoring.

The 21-year-old Veleno scored in his fifth NHL game. The Reds Wings were eager to see if the 30th overall 2018 draft pick is ready to part of their immediate future. He played this past season in the Swedish professional league, where he had 11 goals and nine assists in 46 games.

“I think a lot of guys want to make some good last impressions so we’ve got something to play for,” he said. “I’m here as well trying to do the same thing leading up to next year. I want to have an opening spot next year and start off with the Wings and stay here the whole season, so I’m going to make sure I play my best.”

With injuries and a trade-deadline sell-off, Columbus also has been auditioning players for the future, including Bayreuther. The 26-year-old had a stint with Dallas, signed with the Blue Jackets in October and was in the minors until being promoted April 19.

“There’s so many other guys in our situation where we’ve spent time in the AHL and we’re given this opportunity, and we’re just trying to do everything we can to be here as long as we can,” he said.

KIVI WILL FINISH IT

Tortorella said Kivlenieks will get another start in the net Saturday. Elvis Merzlikins started the four in a row after Joonas Korpisalo was injured in late April.