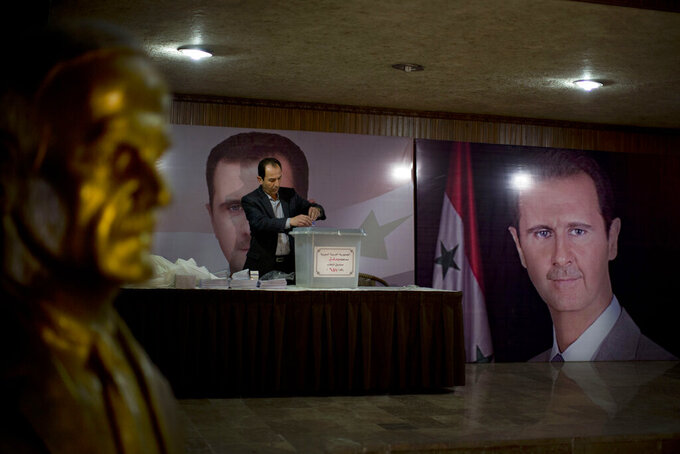 Hassan Ammar, ASSOCIATED PRESS
FILE - In this April 13, 2016 file photo, a Syrian election official waits for voters at a polling station with posters of President Bashar Assad during the parliamentary election in Damascus, Syria. On Sunday, April 18, 2021, Syria’s parliament speaker announced that presidential elections in the war-ravaged country will be held May 26. The election is widely expected to give Assad a fourth seven-year term. (AP Photo/Hassan Ammar, File)

BEIRUT (AP) — President Bashar Assad formally announced Wednesday he will run for reelection in war-torn Syria, and was expected to win a fourth seven-year term in the largely symbolic May 26 vote.

The elections would be the second held during the course of the country's 10-year conflict and the second following a constitutional change that allows for multiple candidates to run for the top job.

But Assad, who has been in office for over 21 years, is unlikely to face any serious competition. In the last elections in 2014, he faced two contenders and won by a landslide, securing nearly 90% of the vote.

Many Western countries have placed Assad and his allies on a sanctions list and view the elections as a sham aimed at giving the incumbent president a veneer of legitimacy.

Divided and exiled, Syria's opposition is effectively barred from fielding any candidates. The 2014 constitutional amendment allowing for multiple candidates includes the conditions that any candidate must have lived in Syria for the past 10 years and cannot have any other citizenship.

So far, five candidates, including the country's first woman, have submitted their names as candidates for the top job. Lawmakers must approve who can run. Parliament confirmed Assad's submission as a candidate Wednesday.

Assad, 55, took office after his father, Hafez passed away following 30 years ruling the country. After initially promising reforms, he tightened his grip on power.

Inspired by other protests in the region in 2011, Syrians took to the streets demanding more freedoms but were met with a brutal crackdown. Syria then descended into a civil conflict that has left it torn, its infrastructure in ruins and half its population displaced inside or outside the country.

Nearly half a million people have been killed, foreign troops and fighters are based in different parts of Syria and nearly 80% of the population lives in poverty.

The legitimacy of the upcoming elections will undoubtedly be questioned.

Under a U.N. resolution for a political resolution of the conflict, a new constitution should be drafted and approved in a public referendum before U.N.-monitored presidential elections are to take place. But little progress has been made on the drafting committee and Assad continues to have the backing of Russia and Iran.