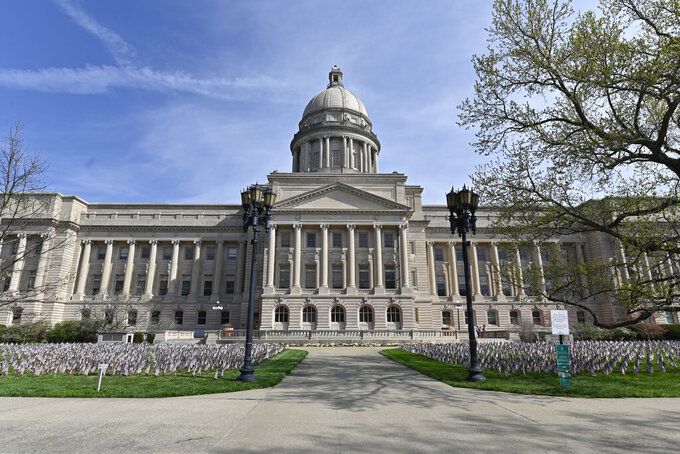 Timothy D. Easley, ASSOCIATED PRESS
FILE - The exterior of the Kentucky state Capitol in Frankfort, Ky., is pictured on April 7, 2021. Kentucky Democrats said Wednesday, Nov. 30, 2022, that they are taking the next steps in their redistricting fight, including asking the state's highest court to immediately take up their lawsuit challenging new Republican-drawn boundaries for state legislative and congressional districts. (AP Photo/Timothy D. Easley, File)

FRANKFORT, Ky. (AP) — Kentucky Democrats said Wednesday they're taking the next steps in their redistricting fight, including asking the state's highest court to immediately take up their lawsuit challenging new Republican-drawn boundaries for state legislative and congressional districts.

The request comes about three weeks after a circuit judge ruled that the congressional and state House maps crafted by the GOP-dominated legislature did not violate the state constitution.

The state Democratic Party said a notice of appeal was sent to the Court of Appeals in response to the lower court ruling. In a separate motion, Democrats said they're asking the state Supreme Court to take up the case immediately, bypassing the intermediate Court of Appeals.

“We are continuing our fight to stop the partisan gerrymandering of the GOP supermajority and are appealing this case to stop extreme Republicans from slicing up cities and counties every 10 years to put political gain above the best interests of Kentuckians," state Democratic Party Chair Colmon Elridge said in a statement Wednesday.

State Republican Party spokesman Sean Southard responded that Democrats continue to “run to the courts to save them from their poor recruiting class in an attempt to nullify the results of the most recent election."

“Sure seems like election denialism to me,” he said in a statement. "They are, of course, welcome to pursue any sort of frivolous lawsuit they wish."

With the newly drawn districts in effect, Republicans increased their legislative supermajorities in the November midterm election. Several Democratic state House members lost their reelection bids after having Republican-friendlier territory tacked onto their districts.

Kentucky Democrats lost the initial round in the legal fight two days after the election, when Franklin County Circuit Judge Thomas Wingate ruled that the congressional and state House maps did not violate the state constitution.

Wingate wrote “there is no doubt” that the new boundaries amounted to “partisan gerrymanders.” But he added that Kentucky’s constitution “does not explicitly forbid the consideration of partisan interests in apportioning representation.”

Citing separation-of-power considerations, the judge said he would not “overstep the explicit role given to the judiciary in assessing the constitutionality of an apportionment scheme by delving into legislative motive.”

The new maps are being challenged in a lawsuit filed by the Kentucky Democratic Party along with several individuals, including Democratic state Rep. Derrick Graham.

The suit contends the state House map divided some of Kentucky’s most populated counties into multiple districts to “dilute the influence” of Democratic voters.

Criticism about the new congressional maps was mainly aimed at extending the oddly shaped 1st Congressional District to add Franklin County, which includes Democratic-leaning Frankfort in central Kentucky. The district, a GOP stronghold, is predominantly based in western Kentucky.

Supporters of the redistricting bills passed this year say they're confident the new boundaries will hold up against the legal challenge.