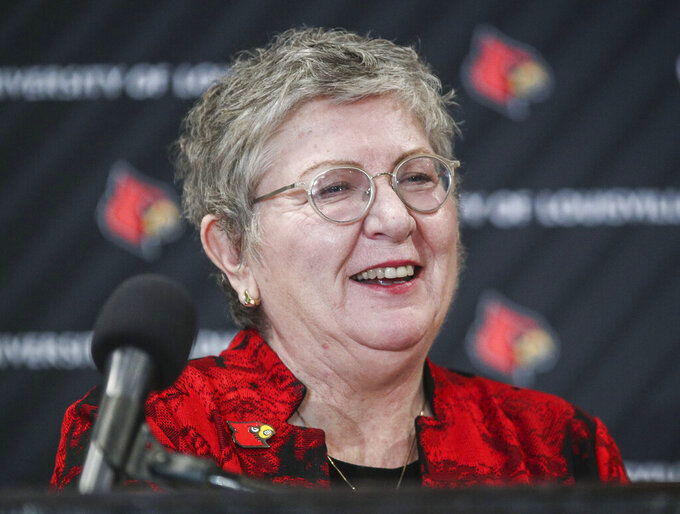 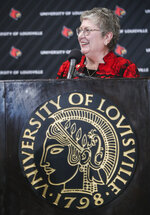 LOUISVILLE, Ky. (AP) — Longtime college administrator Kim Schatzel was selected Wednesday as the next president of the University of Louisville and says she will bring her own experience as a first-generation college student to showcase the “transformative power” of higher education.

Schatzel, 66, pledged from the outset to make a long-term commitment to the university as she was introduced as its 19th president. Her unanimous selection by trustees ended a nearly yearlong search for a successor to ex-President Neeli Bendapudi, whose departure for the top job at Penn State University came as a shock to Louisville officials.

“I want to make it real clear -- you’re stuck with me," Schatzel said at a news conference. "This is a fabulous institution; this is an opportunity of a lifetime.”

Since 2016, Schatzel has served as president of Towson University in Maryland, where her tenure included advancing diversity, equity and inclusion initiatives. She previously served as provost of Eastern Michigan University and dean of the College of Business at the University of Michigan-Dearborn. She also is a professor of marketing.

Schatzel will assume the presidency of Louisville, an Atlantic Coast Conference school, on Feb. 1, 2023.

She said she plans to spend the first few weeks on a “listening tour,” gathering input from the university community and beyond. She promised a team approach to broaden the university's impact as an “anchor institution” for Louisville and the state.

She said she looks forward to working with “our campus and community partners to advance U of L’s reputation as a preeminent institution nationally recognized for its excellence in research and scholarly work, education, inclusive student success, innovation, the arts and athletics.”

Introducing herself to the campus, Schatzel pointed to her own experience as a first-generation college student in her family — “just like one out of three U of L students today.”

“I see myself in them, and I am a real-life example of the transformative power of higher education — all in one generation,” she said. "I hope that when I visit with those students, cheer with our students, listen to their musical performances and applaud their plays, when they share their research and share their art with me, I hope they see themselves in me.”

She also brings a vast amount of private-sector experience to the job, having spent about 20 years as a corporate leader and entrepreneur in the technology and advanced manufacturing sectors. Schatzel founded and served as the president, chief operating officer and later CEO of a multinational advanced manufacturing firm, according to a news release.

Lori Stewart Gonzalez, who served as U of L’s interim president since December 2021, will return to her previous leadership role as executive vice president and university provost, the school said.

Mary Nixon, the university's board chair, said Schatzel brings "the best of many worlds to the U of L community.” The many factors considered during the presidential search included finding someone willing to make a commitment to U of L for “the long haul,” Nixon said.

“We all had a shock last December when Dr. Bendipudi resigned unexpectedly,” she said.

Schatzel said she plans to spend “at least 10 years” in the Louisville community, stressing it takes time to make transformational change at a university. She shrugged off her age, noting that she ran a half-marathon last year in 2 hours and 19 minutes at age 65.