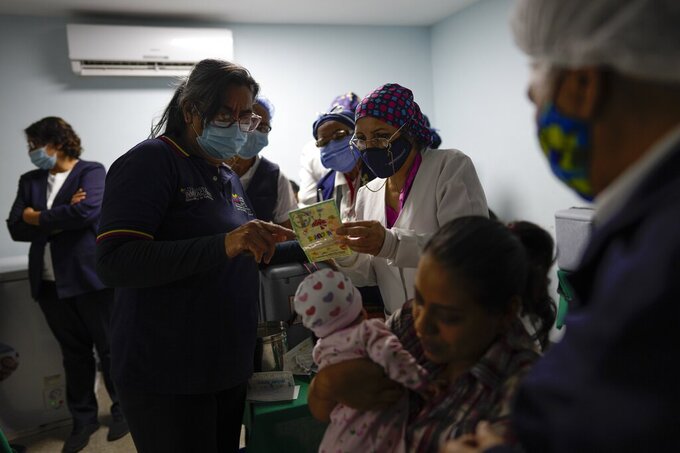 CARACAS, Venezuela (AP) — Wails pierced the walls of the walk-in clinic tucked among rundown homes in the heart of Venezuela’s capital. Artemis Parra got one vaccine in each arm, for polio and measles. The shots were free at the government site, and they filled gaps in the 1-year-old’s vaccination record. But they weren't enough to meet national requirements for children her age. Artemis needs two more, to protect against potentially fatal diarrheal and respiratory diseases. The government has no supply of those vaccines, so they'd cost $400 from private doctors — a bill her unemployed mother and government-worker father can’t afford.

Public health officials have long warned that Venezuela, with an unraveling health-care system and roughly a decade of political unrest, has alarmingly low vaccination rates. The country is banned from purchasing vaccines through a regional system that offers affordable prices until it pays off an $11 million debt — largely the result of a power struggle between the government and the U.S.-backed opposition.

Specific data on vaccination rates have been elusive in Venezuela, where institutions are shrouded in secrecy, corruption and bureaucracy. The country hasn’t published rates since 2015.

But an Associated Press analysis of rare government data and estimates from public health agencies shows that Venezuela’s vaccination crisis is growing, putting it among the world’s worst countries for inoculating children against potentially fatal diseases.

Many children lack several of the 10 vaccines recommended by 12 months of age, to protect against 14 diseases including polio, measles and tuberculosis. Two of the shots — those Artemis needs, to protect against rotavirus and and pneumococcal disease — have hardly been given at all over the past several years.

Rates are lowest in states far from the capital and large cities. Government and opposition officials trade blame, but most agree: There are not enough shots for a population that desperately needs them in a country plagued by supply issues.

The low vaccination rates have led to a resurgence of vaccine-preventable diseases, including outbreaks of measles and diphtheria, a serious infection of the nose and throat. The Americas in 2016 became the first region in the world to be declared free of measles, only to see the Venezuelan outbreak begin the following year.

Experts say political turmoil in Venezuela is largely to blame for the vaccination crisis, with t he COVID-19 pandemic exacerbating access issues.

“In situations of conflict, you often see a variety of different parties using the provision of health services as a way of generating favor,” said Katherine Bliss, director of the Immunizations and Health Systems Resilience program at the Washington-based Center for Strategic and International Studies. “That may also be manifested in a lack of trust in public authorities and a lack of trust in public programs, like vaccination programs.”

Bliss said overall vaccination rates dropped globally during pandemic lockdowns, and many nations rebounded. But Venezuela and others in Latin America struggled. They cannot fully fund vaccination programs but don’t qualify for the aid available to the poorest nations. It’s no surprise that the starkest lags appear outside urban centers, said Bliss, who's examined Venezuela’s public health in the context of its crisis.

“Equitable access to health is very challenging,” she said, noting that rural, indigenous populations “face greater challenges just in terms of access to the same kind of quality services that people in more populated regions may have.”

Data from Venezuela’s health department breaking down the percentage of children who have been immunized according to the nation’s vaccination schedule — provided to the AP by a medical professional on the condition of anonymity, for fear of retribution — show that roughly 70% of children had received one shot against measles but less than 30% had the standard required second dose. In the two southeastern states along the border with Brazil, the rate for the second dose is as low as 15% for that smaller, rural population.

Globally, 84% of all children received a first dose, and 70% got two, according to World Health Organization and UNICEF data.

The Venezuelan government did not respond to multiple inquiries from AP about the vaccine crisis — including the country's shortage of shots, upcoming orders and vaccination needs, sources of vaccine doses, and its debt or payments.

For rotavirus and pneumococcal disease vaccines, United Nations agencies estimate Venezuela's national rate at zero for both shots, and the Venezuelan document obtained by AP doesn't list either vaccine.

Neighboring countries have higher rates for both rotavirus and pneumococcal vaccines: Colombia at 87% and 89%, respectively, and Brazil at 76% and 79%.

Neither shot was offered at clinics like the one Artemis Parra visited. Pediatricians at public hospitals and staff at vaccination sites routinely instruct parents to purchase the shots from private practices. But, as in Artemis' household, most families cannot afford them.

“I’m desperate to give her the vaccines,” Artemis’ mother, Adrianny Gonzalez said. “It would be awful to have her hospitalized because of a virus.”

The clinic was set up as part of a vaccination campaign to get measles, rubella and polio shots in children’s arms. Vaccines began arriving in early June through the Pan American Health Organization, WHO’s arm in the Americas, but it's unclear how they were purchased.

For years, Venezuela’s government traditionally bought most of its supply through PAHO’s Revolving Fund for Access to Vaccines. The program consolidates demand from participating countries and leverages purchasing power for lower prices.

This year, for example, the measles, rubella and mumps vaccine costs as little as $1.55 per dose. Prices are higher for others: rotavirus shots at $6.50, pneumococcal vaccines, $14.50.

Despite Venezuela’s debt, the government and PAHO managed to get 4.4 million shots for the vaccination drive. PAHO hailed the shipments as the result of cooperation with Venezuela’s health agency but did not answer AP’s inquiries about the exact source of payment. A PAHO official insisted at a June news conference that the country is still barred from buying vaccines.

For families, the vaccine source isn't important. The clinics are a chance to protect their children at no cost, without having to find a private doctor or cross into another country. Few Venezuelan children get regular checkups, so parents often learn about the clinics through social media or other places where their families get aid, such as government food programs.

At 4 a.m. on a mid-June Saturday, Dimas Campos was first in line to make sure his 19-month-old daughter would get her shots. Staff checked vaccination records and directed parents to an area where nurses gave vaccines. Children’s songs played; a bouncy castle beckoned kids to play before and after their shots.

In line, Campos told other parents one way to get vaccines not available at the clinic: Travel to Colombia. It’s a journey of more than 500 miles from Caracas, Venezuela’s capital. For those fortunate enough to have a car, the trip takes at least 13 hours, thanks to poor road conditions and military checkpoints. A bus trip is longer.

“My wife is figuring it out right now, to go as soon as possible,” Campos said, as his family estimated they’d spend about $100 for the trip to Colombia for free shots at a humanitarian aid site, versus $400 on the vaccines at a private Venezuelan practice. “You get on the bus at night, arrive in the morning, get vaccinated, and that’s it.”

Such trips show the effect of Venezuela's crisis beyond its borders. Peter Hotez, dean of the National School of Tropical Medicine at Baylor College of Medicine in Texas, said Venezuela's low vaccination rates are destabilizing the entire continent, with measles outbreaks crossing into neighboring Brazil and Colombia.

Now, Venezuela and other countries face a deadline of Friday to order vaccines for next year from PAHO’s Revolving Fund.

Dr. Ciro Ugarte, PAHO’s director of health emergencies, emphasized that Venezuela can't make purchases: “The debt of Venezuela to the revolving fund for vaccines is still on.” But he said PAHO is trying to help Venezuela with other vaccines sources, through donations, other participating countries, and various partners.

In 2017, Venezuela purchased 33 million doses, and that increased to 43 million in 2018, according to a PAHO report. In 2019, with outstanding arrears, the government bought no doses — only a smaller number of syringes, likely to administer any vaccines remaining from prior orders or humanitarian aid.

AP’s analysis shows that dips in vaccination rates matched periods of political decline. A downward trend began in 2016, just before the U.S. and other countries imposed broad economic sanctions to try to topple President Nicolás Maduro.

Maduro’s socialist government and the faction of the opposition backed by the U.S. and led by Juan Guaidó have accused each other of politically exploiting the issue of vaccines and aid.

The U.S. gave Guaidó and his parallel government control of hundreds of millions of dollars in assets. Disbursements are subject to approval by the U.S. Department of Treasury.

Treasury officials referred questions about approvals, including any to potentially cover vaccine purchases, to Guaidó’s team.

Guaido's opposition faction didn't respond to inquiries from AP about vaccine payments and any use of frozen assets.

For Dr. Huniades Urbina, academic secretary of Venezuela’s National Academy of Medicine, politics are keeping kids unvaccinated, with each side more concerned about credit for purchasing shots than children's health.

“Who is going to take the baton or the medal for buying the vaccine, the Maduro government or the interim government of Guaidó?” he said. “Time is wasted, because the money is there.”

For COVID-19 vaccination, Venezuela purchased doses and used donations from China, Russia and Cuba. The country of 28 million people has vaccinated roughly half its population, according to PAHO. That's lower than many North American and European nations, but higher than some parts of Latin America and Africa.

Experts place a high priority on Africa but often forget the depth of poverty and health insecurity in Latin America, said Hotez, the medical school dean. Three-quarters of Venezuelans live on less than $1.90 a day — the international standard for extreme poverty — amid soaring food prices.

“Children in Venezuela are being placed at risk because of that one-two hit of malnutrition and lack of access to vaccination,” he said.

Maduro has spent much of 2022 promoting an apparent economic recovery. But while inflation has slowed — it's still among the world's worst — and businesses are cropping up, the lack of vaccines shows that the crisis that began before the death of Hugo Chávez, Maduro’s predecessor, isn’t over.

“I get a dad who says, ‘Doctor, I’ll pay you in 15 days,’” he said. “Sometimes they don’t have money to pay the appointment, vaccines. Of the three that he is supposed to get, he only gets two or one, and so on.”

Rotavirus and pneumococcal inoculations are a top concern for public health officials. Handwashing and other good hygiene can help. But across Venezuela — from upper-class neighborhoods in the capital to impoverished communities by the Andes and beach towns along the coast — potable water service is unreliable at best.

Some parents are aware of the risks of skipping the expensive vaccines, but they say they have no choice.

“We do not have the budget,” stay-at-home mom Yuberlim Salazar said at the vaccination clinic. “It is unfair to save the money to give her the vaccine and not give food to my daughter. I prefer to give my daughter food.”