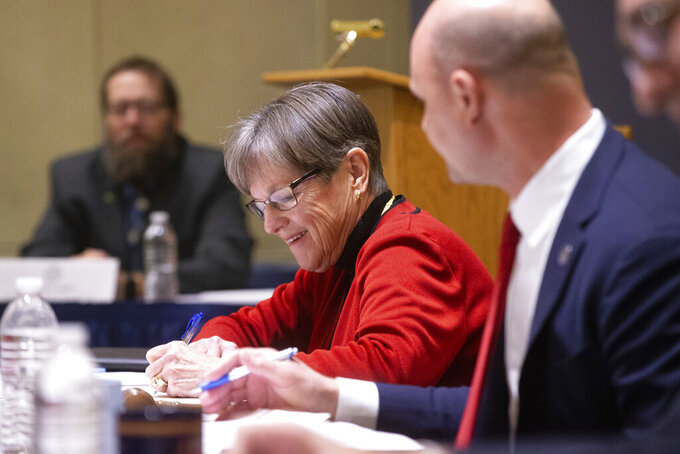 Secretary of State Scott Schwab aggressively defends the integrity of Kansas elections despite the wide circulation of baseless claims of problems among fellow Republicans. He told reporters, "The chaos is in the rhetoric and people demanding recounts.”

Schwab, Democratic Gov. Laura Kelly and Republican Attorney General Derek Schmidt met Thursday as the State Board of Canvassers to review and certify the Nov. 8 election results. It's typically a routine task, and Thursday's meeting took about five minutes in an auditorium empty but them, their aides, employees of Schwab's office and reporters.

“Our volunteers and our clerks do great work despite a horrible environment,” Schwab said during the meeting. "I don’t appreciate the rhetoric that causes folks to incite violence against people who just want to do a civic duty.”

Schwab said his office has heard reports of threats against county election officials, but he didn't provide more details.

The secretary of state's office said a little more than 1 million Kansas voters cast ballots in the November election, 51.1% of the nearly 2 million registered.

The brief and smooth Kansas meeting contrasted with attempts in Arizona, Michigan and Pennsylvania to block the certification of results. No recount of any November result was requested in Kansas.

In fact, during Thursday's meeting, Schmidt moved to certify the results even though Kelly narrowly defeated him to win a second term.

“I've said many times I have confidence in our Kansas system,” Schmidt told reporters later.