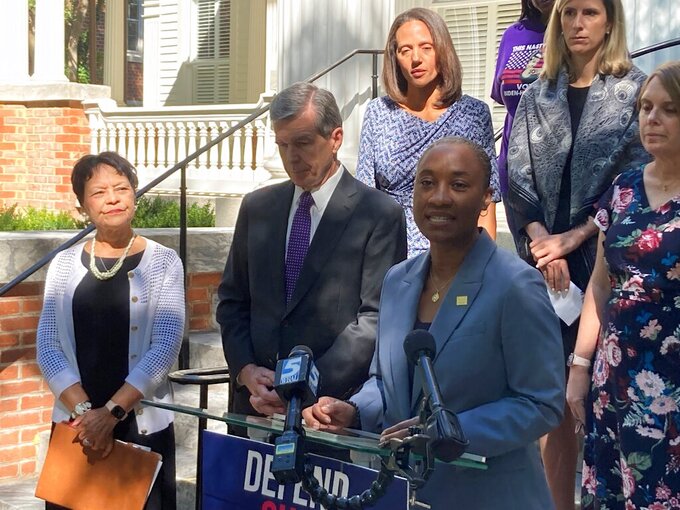 “I have seen in states across this country abortion under attack,” Butler said at a news conference outside state Democratic Party headquarters. “That’s why here in North Carolina, we know that these legislative races ... are all difference makers in protecting abortion rights and protecting essential health care options for all women in this great state.”

Republicans could earn veto-proof majorities if they win two more Senate seats and three more House seats, making it difficult for Cooper to derail abortion legislation with his veto stamp.

The GOP-controlled legislature hasn't overridden any of Cooper's nearly 50 vetoes since Democratic seat gains during the 2018 election took effect.

“In North Carolina, women still have reproductive freedom,” Cooper said. “And as governor, I aim to keep it that way. But I cannot do it alone.”

In light of that decision, a federal judge last month reinstated a 1973 North Carolina law prohibiting abortions after 20 weeks that had been blocked in 2019. State law does allow some exceptions, such as during medical emergencies that threaten the woman's life.

While no consensus has been reached among Republicans about what additional restrictions they would consider, Senate leader Phil Berger has said he would prefer restrictions on abortion after roughly the first three months of pregnancy. House Speaker Tim Moore would personally prefer banning abortions once an ultrasound first detects cardiac activity — typically around six weeks after fertilization.

“We believe that medical decisions and bodily autonomy of every woman in North Carolina should be in their hands — not Phil Berger's and not Tim Moore’s," said Democratic state Sen. Sydney Batch of Wake County, who is seeking victory in a swing district.

State Republicans have attempted to downplay abortion in the fall campaign. Stephen Wiley, the House Republican Caucus director, said “the Democratic Party is desperate to make this election about something other than their own record,” citing a slumping stock market and inflation. ”Democrats know that voters are fed up with their irresponsible spending spree, and instead of actually working to address our economic malaise, they want to focus on divisive social issues.”

Lillian's List, a nonprofit which works to get women elected in North Carolina, has endorsed 25 legislative candidates. And its political action committee and members have contributed more than $150,000 to campaigns, group Executive Director Sarah Preston said.

Forty-three of the legislature's 170 members — 29 Democrats and 14 Republicans are women. Preston said she's hopeful that the recent uptick on voter registration among women following the U.S. Supreme Court decision will result in more progressive women getting elected.