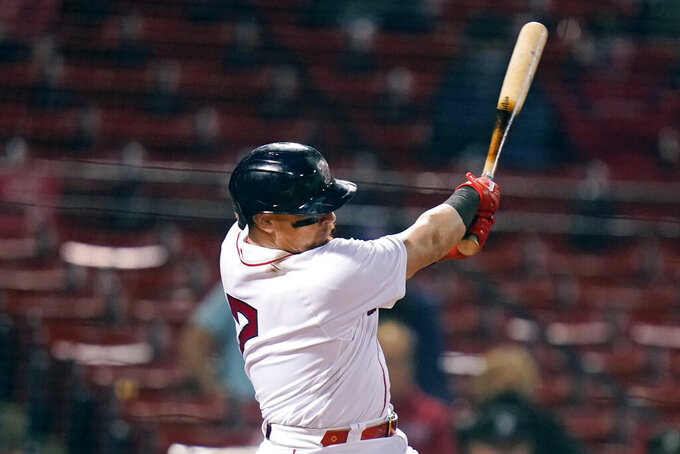 Charles Krupa, ASSOCIATED PRESS
Boston Red Sox's Christian Vazquez follows through on his RBI double during the sixth inning of a baseball game against the Detroit Tigers at Fenway Park, Tuesday, May 4, 2021, in Boston. (AP Photo/Charles Krupa)

Alex Verdugo, Hunter Renfroe and Kiké Hernández also went deep for Boston, which led 8-2 after three innings but needed to hold off the Tigers late in a slugfest that featured 24 hits and 13 pitchers.

The Tigers had the bases loaded with one out in the eighth, but Matt Barnes came out of the bullpen and got Miguel Cabrera to ground into a double play that ended the threat. Barnes didn’t allow a baserunner in the ninth, picking up his seventh save.

Cabrera went 0 for 5, striking out twice and grounding into two double plays. The 11-time All-Star with two AL MVP awards and four batting titles saw his batting average plummet to .105 (6 for 57).

The 38-year-old Cabrera is in an 0-for-23 slump with 13 strikeouts. He’s fanned two times in six straight games.

JaCoby Jones had a three-run homer, keying a four-run rally in the sixth that pulled Detroit to 9-7. Robbie Grossman went 3 for 3, walked twice and finished with three RBIs, but the Tigers couldn’t overcome their slow start and struck out 13 times.

“We lost a couple of key at-bats. They just kept coming at us," Detroit manager A.J. Hinch said. “I thought our bats were the best they’ve been in a while. I thought our guys hung in quite a bit, just not quite enough.”

Pivetta (4-0) allowed three runs on six hits and two walks. He said it's nice to have the kind of offensive support the Red Sox lineup can give a pitcher.

“It’s incredible what I’m seeing here. They’re doing a really great job every single day, going out and grinding out at-bats,” Pivetta said. “When you get a four-spot in the first inning, it takes a lot of pressure off you but you’ve still got a job to do. You’ve still got to get deep in the baseball game.”

Pivetta was replaced in the sixth by Austin Brice, who didn’t last the inning. After allowing a leadoff single, Brice hit a batter with a one-out pitch and Jones made him pay with a homer to left that pulled Detroit to 9-6. Grossman added an RBI single, his third hit of the night.

Boston was up 4-0 after the first and got three more runs in the second on homers by Verdugo and Bogaerts. Verdugo’s solo shot off reliever Alex Lange was his fourth homer of the season. After J.D. Martinez reached on a single, Bogaerts drove a 1-1 fastball out to left and Boston led 7-2.

Michael Fulmer (1-2) started for the Tigers and got only two outs, allowing four runs — two earned — on four hits and a walk. He also hurt himself with a throwing error while trying to start a double play.

Renfroe, who singled and doubled in his first two at-bats, hit a towering solo homer in the fifth to push Boston’s lead to 9-3.

Although Cabrera is slumping, his teammates believe he'll snap out of it eventually. Cabrera has 2,872 hits, one behind Babe Ruth for 45th on the career list.

“He’s still Miguel Cabrera. In my eyes, he’s one of the greatest right-handed hitters of all time," Grossman said. “I watch him every day just to see if I can get something from him.”

Boston left-hander Chris Sale, who underwent Tommy John surgery in March 2020, threw off a mound. Chaim Bloom, the team's chief baseball officer, said Sale’s rehabilitation at the team’s facility in Florida is going well but the Red Sox aren’t about to set a target date for the pitcher's return.

“Hopefully, I think we’re getting closer to where we can start mapping out a timetable. I don’t have one, but he is progressing,” Bloom said. “It was pretty light work, but the next step is obviously to get into regular mound work and mound work with some intensity, and then we can start thinking about facing hitters.”

Tigers: LHP Matthew Boyd (left knee tendinitis) threw a bullpen and will throw another one later this week, Hinch said. Boyd could be ready to return to the rotation by Sunday when the Tigers host Minnesota.

Red Sox: 3B Rafael Devers was out of the lineup because of soreness in his right shoulder. “We’ve got to give him one more day,” Cora said. “He came in for treatment yesterday for his shoulder. We felt like one more day was going to benefit him."

Red Sox: LHP Martín Pérez (0-2, 4.70) struck out a season-high seven but didn’t figure in the decision Sunday in Boston’s 5-3 loss at Texas.