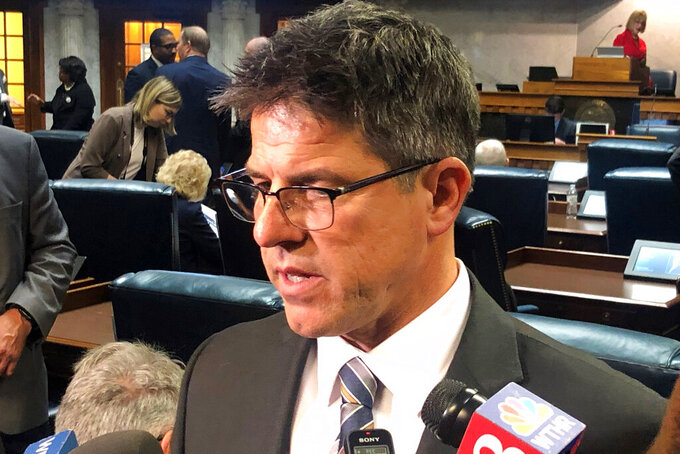 INDIANAPOLIS (AP) — Indiana lawmakers returned to the Statehouse on Tuesday, fresh off Republican election victories that maintained the party's dominance of the Legislature and facing a possible list of expensive proposals from GOP Gov. Eric Holcomb.

The four-month-long 2023 session that begins in early January will focus on drafting a new state budget, with Democrats calling for a pause on debating contentious social issues after Republican lawmakers pushed through the state’s abortion ban over the summer.

State tax collections have continued coming in higher than expected when legislators adopted the current two-year, $37 billion budget in 2021, and legislators will see plenty of requests for additional state spending.

Besides the constant push for increased K-12 school funding, a Holcomb-appointed commission has recommended a $240 million annual boost to lift funding for county public health departments to the national average. Administration officials have also discussed the higher costs from national inflation on state construction projects and the need to increase pay in order to retain state employees.

Bray said increasing public health funding is “worthwhile,” but that local health departments might not be immediately ready to effectively use the additional money.

“The thing that we have to make sure of is that we can get that money distributed out to the local health departments and then they can do a lot of good with it,” Bray said. “That’s a big change right off the bat. So, we’ll have a conversation about whether we can do all of that at once.”

Both Huston and Bray, however, said Republican lawmakers were supportive of the state budget, including another $500 million round of regional development grants that state officials gave out last year.

Republicans go into the 2023 legislative session commanding the House by a 70-30 margin and the Senate 40-10 — continuing full supermajority control they’ve had since the 2012 elections that allow GOP lawmakers to pass bills into law even if no Democrats are present.

Republicans used that control over the summer to make Indiana the first state to pass an abortion ban since the U.S. Supreme Court overturned Roe v. Wade. The state Supreme Court has allowed abortions to continue in Indiana as it considers a lawsuit from abortion clinic operators who argue that the ban violates the state constitution.

House Democratic leader Phil GiaQuinta, of Fort Wayne, said the Republican-led push on issues such as abortion and banning transgender females from competing in girls school sports put Indiana in a bad light nationally and that such debates should be put aside next year.

“We need to give the social issues a rest,” GiaQuinta said.

Huston and Bray wouldn’t give such assurances Tuesday, although both said they didn’t expect more action on restricting abortion.

“I think we probably will stand pat,” Huston said.

The state Supreme Court justices are scheduled to hear oral arguments in January on the abortion ban lawsuit, which Bray cited as a reason for not taking up the issue again in the coming session.

“It wouldn’t be wise at all for us to take a crack at any changes right now until we know what that ruling is going to be,” Bray said.