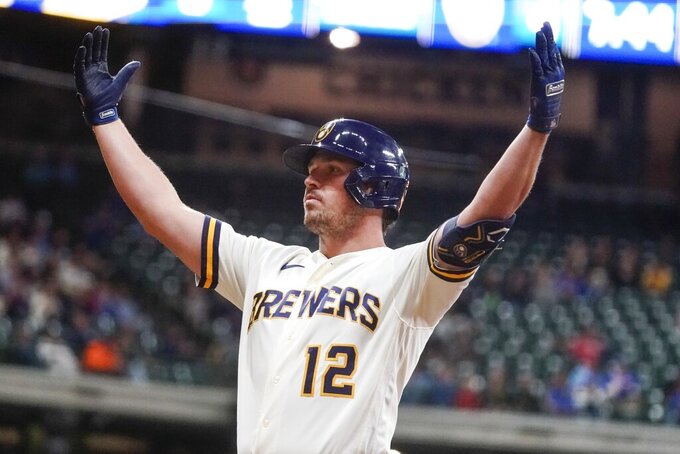 Renfroe batted .255 with 29 home runs, 72 RBIs and an .807 OPS in 125 games this season, his first with the Brewers. He led major league right fielders with 11 assists and ranked 10th in the National League with a .492 slugging percentage.

“Obviously, it’s a productive player who’s done it year in and year out for a while," Angels general manager Perry Minasian said on a Zoom conference with reporters. "It’s a quality two-way guy. Not only can he produce on the offensive side, he’s a quality defender. He can really throw. Just the total package. We felt like he was a really good fit for us.”

Renfroe, who turns 31 in January, is eligible for arbitration again and likely to get a raise after earning a $7.65 million salary this year. He can become a free agent after next season.

He joins an Angels team looking for offense to support superstars Mike Trout and Shohei Ohtani in a top-heavy lineup that struggled overall this year. Los Angeles went 73-89 and finished third in the AL West.

Milwaukee, with a limited budget, was second in the NL Central at 86-76 and missed the playoffs for the first time since 2017 after four consecutive appearances.

Renfroe was drafted 13th overall by San Diego in 2013 and spent his first four big league seasons with the Padres. But the Angels will mark his fifth team in five years, including Tampa Bay (2020) and Boston (2021).

Junk, 26, spent most of the season with Triple-A Salt Lake but made three appearances for the Angels, including two starts. He was 1-1 with a 6.48 ERA in 8 1/3 innings.

Seminaris, 24, was selected by the Angels in the fifth round of the 2020 draft out of Long Beach State. He made a combined 21 starts and three relief appearances this year with High-A Tri-City, Double-A Rocket City and Triple-A Salt Lake, going 7-11 with a 3.54 ERA. He's struck out 209 batters in 185 minor league innings.

“We are happy to welcome three quality young arms to our organization, two of which are already on the major league roster and have a chance to impact our team in 2023,” Milwaukee general manager Matt Arnold said. “The ability to add pitching depth to an already strong stable of big league arms is something we feel good about.”

Milwaukee has several outfield prospects who could fill Renfroe's spot after playing in Triple-A this season.

Garrett Mitchell, a 2020 first-round draft pick, was called up late in the season and had an .832 OPS in 23 games. Sal Frelick, Esteury Ruiz and Joey Wiemer all spent at least part of the season at Triple-A Nashville. Ruiz was acquired from San Diego in the deal for All-Star closer Josh Hader just before the trade deadline.

“We are very thankful to Hunter for all of his contributions, both on and off the field,” Arnold said. “While he will certainly be missed, this is an opportunity for our group of exciting young outfielders to impact our major league team in the near future.”