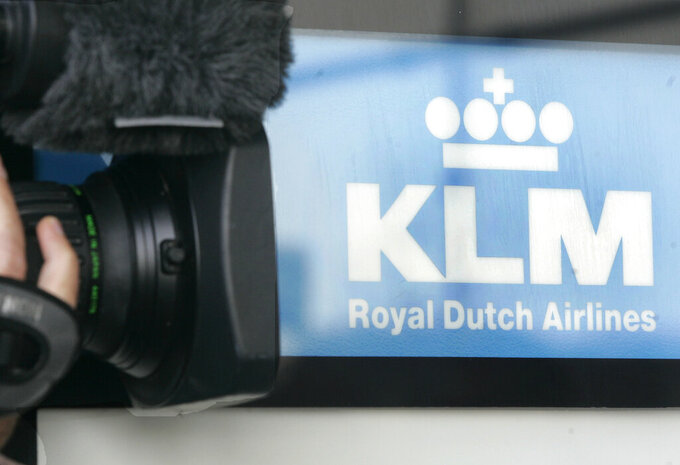 Roberto Pfeil, ASSOCIATED PRESS
FILE - A cameraman films the Logo of Dutch airline KLM at the Cologne Bonn Airport in Cologne, western Germany, Sept. 26, 2008. Dutch flag carrier KLM announced Thursday, June 30, 2022 it is repaying the last portion of loans from the Netherlands government and banks to help it survive when the COVID-19 pandemic threw global aviation into a tailspin. (AP Photo/Roberto Pfeil, file)

Netherlands based campaigners Fossielvrij NL, supported by Reclame Fossielvrij and environmental lawyers from ClientEarth, said they think the lawsuit is the first to challenge alleged “greenwashing” by the airline industry.

The groups claim KLM violated European consumer law by misleading customers with ads and a carbon offset program that “give a false impression over the sustainability of its flights and plans to address its climate harm."

“KLM’s marketing misleads consumers into believing that its flights won’t worsen the climate emergency. But this is a myth," Hiske Arts, a campaigner at Fossielvrij NL, said.

The airline did not immediately response to an email seeking comment.

The groups notified KLM in May that they planned to file the lawsuit. It focuses on the airline's “Fly Responsibly” campaign and its statement that KLM was committed to “the targets defined in the Paris Climate Agreement."

“The lawsuit will argue that these claims are highly misleading, since KLM’s plan for continual increases in flying is at odds with the rapid and deep emissions reductions across all sectors which (a U.N. panel) says is needed to avoid the worst impacts of climate breakdown,” ClientEarth said.

As part of its campaign, KLM said customers could buy carbon offset coverage to fund reforestation projects and the purchase of biofuels. The environmental groups said the product promoted by the airline to reduce the climate impact of airplanes is illusory.

The groups said the aviation sector won't reach net-zero emissions if its does not limit the overall number of flights.

“While climate experts warn we need to reduce air traffic to keep a just and livable world within reach, KLM and the airline industry are continuing to focus on growth at any cost and lobbying intensively against climate regulation," ClientEarth lawyer Johnny White said.

In addition to the lawsuit filed with the District Court of Amsterdam, the environmental groups are seeking a ban on all fossil fuel advertising in the European Union.